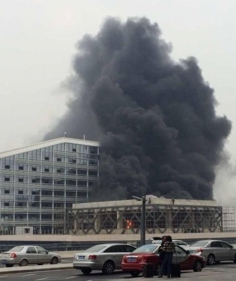 CNN reports that a blaze at the Rongjian Farmers’ Market in the southern city of Shenzhen has left 16 dead and five more injured:

Sixteen people have been killed and five others injured in a fire early Wednesday at a market in the southern Chinese city of Shenzhen, the local government said.

About 145 firefighters worked to extinguish the blaze, which charred an area of more than 1,000 square meters (10,800 square feet), the local government said in a post on Weibo, a Twitter-like service in China.

The blaze started around 1 a.m. Wednesday, the state news agency Xinhua reported. Later in the morning, firefighters were still clearing away the embers and searching for survivors in the debris, the agency said. [Source]

The South China Morning Post reports that faulty fire hydrants at the market may have allowed the fire to grow out of control, and notes that the death toll could in fact be higher than 16:

Witnesses said people trying to escape the blaze in the Rongjian wholesale market in Guangming found the fire hydrants were not working.

Wang Long, a security guard who works nearby, said he called police at 1.29am when he spotted the fire and then tried to wake up more than 20 people sleeping at the more than 260 stalls in the market, which opened in 2008.

“The fire hydrants were not working and the first four fire trucks arrived at about 1.40 am,” Wang said. “The fire should have been under control if the safety equipment worked well. More people should have survived.” he said. Many wholesalers stay at the market to unload fruit in the early morning. [Source]

SCMP’s article was posted with this short video of the charred market: