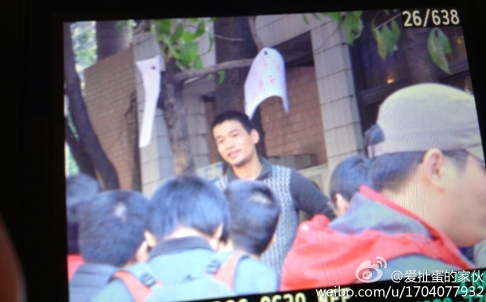 Hundreds of people had rallied outside the offices of the leading newspaper Southern Weekly demanding respect for media freedom after censors replaced the newspaper’s New Year editorial. About 100 editors and reporters with the newspaper declared a strike in protest. Dozens of other activists were detained at the time.

Liu, 35, had “attracted a large crowd of onlookers by holding banners and making speeches”, the indictment read. It said Liu did so on three consecutive days in January.

[…] Liu was initially detained on March 11 on charges of misstating the registered capital of a company in 2011. Supporters shared photos online of them holding banners calling for his release. He was formally arrested in April and police passed the case to prosecutors in June. Only on November 27 were the additional charges related to the January protest brought forward. [Source]

Boehler also highlights the case of Yang Maodong (Guo Feixiong), who was detained in August and not allowed to see a lawyer until last month.

I remember those few days over a year ago when they started to force me out, shutting my accounts down and blocking anything I wrote or had written. I watched from the sidelines as internet users shared their comments. It was like watching my own funeral. I was so deeply moved — it’s something that’s hard even to describe.

These past few years I’ve been driven into exile, hunted down and attacked from all sides. And now I feel quite certain it’s all been worth it.

[…] Today is not yesterday. Being blocked is not something terrible. It is, in fact, a kind of honour. It is a testament to your strength and to your contributions. Last year they snuffed me out, and no doubt in the future they will seek to restrain my voice in every aspect possible. But life goes on, and in fact I enjoy perhaps even more space than I did before. Those who have real strength have nothing to fear from their obstruction.

The truth is, those who restrain us are the ones whose hearts are burdened by fear. [Source]