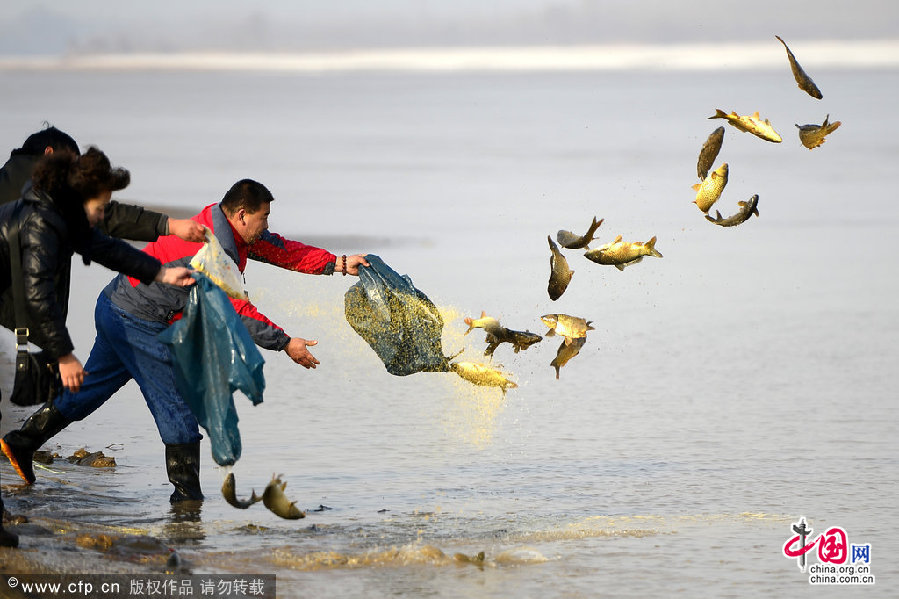 Supposed to help with rebirth, or at least a long life, what looked remarkably like a Buddhist act of faith called “releasing lives to freedom” went horribly wrong on the banks of the Yellow River this week when fishermen waited downstream with nets to “wildly” snap up a large amount of the released carp, Chinese media reported.

In “fangsheng,” or “release life,” believers take animals from captivity and release them into the natural environment. According to the Chinese intellectual Lin Yutang, turtles are released to pray for longevity and fish for enlightenment, often into rivers or lakes. Birds are released into the air. Reports said the act was to “restock” the river with carp.

Either way, the saved lives, or stock, are not supposed to be immediately captured by other people opportunistically waiting nearby. […] [Source]

Wily fishermen are not the only peril facing fangsheng-ed carp. Many died from pollution in Beijing’s Beishahe River this summer, leaving the water “infested with flies and rotting fish.” In Shanghai in April, water authorities insisted that 250kg of dead fish extracted from local waterways had perished because the local devout released too many at once, because of the sudden change in temperature, and “from other environmental factors” that had nothing at all to do with poor water quality.

On the other hand, the released fish can also pose a problem to others. In South Korea, Buddhists’ annual release of some 2 million fish helped the spread of invasive species and the destruction of dozens of indigenous ones. Professor Mok Jeong Bae of the Buddhist Dongguk University in Seoul told The Los Angeles Times in 1992:

“In recent years, it has grown more and more egotistic, losing its revered atmosphere,” Mok said. “Rather than having a monk release a single fish on behalf of all believers, each participant wants to release a fish to seek a reward for himself.”

Fishermen, too, have latched onto the ceremonies to reap profits. They sell fish to worshipers, then recapture them in nets laid near the riverbank after the first group of Buddhists releases them. They haul the fish back to shore to resell their catch to the next group.

“Sometimes the fish have been caught, released and caught so many times that some of them get exhausted and die. It winds up quite the opposite of replenishing life,” Mok said. [Source]

Buddhists were probably not behind the reported release of piranha into Guangxi’s Liu River last year.