Your Christmas Lights Head to China, and Back Again 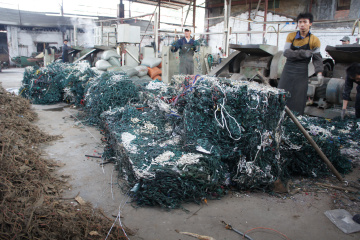 Reporting on his observations from a factory in Shijiao, Junkyard Planet author Adam Minter explains at Time that China will soon be recycling this year’s discarded Christmas tree lights, turning them into products like door knobs and flip-flops to satisfy American consumerism:

Of course, for many Americans, the words “China” and “recycling,” when combined, don’t conjure up images of safe, green, and sustainable businesses. To be sure, few if any Chinese Christmas tree light recycling factories meet U.S. health and safety standards. But despite the environmental good associated with recycling, it is rarely a black and white matter. Rather, it exists in a gray zone, where one must weigh the costs of extracting copper from insulation against the cost of extracting copper from a mine. That’s a moral calculus as well as an economic one. After all, good intentions don’t turn old beer cans into new ones, and nobody without a profit motive is going to clean up your junk, much less turn it into something new. Put differently, if you and other consumers around the world weren’t consuming so much stuff made in China, there’d be very little need for your Christmas tree lights to go there for recycling.

It’s a point worth thinking about when, in the days after Christmas, Americans load up their recycling bins with packaging, wrapping paper, and old Christmas tree lights, and set them on the curb or in the trash room. Somebody, somewhere, is going to pick up that bin—most likely for free. But they aren’t doing it for the planet, and they aren’t doing it to be green. They’re doing it because, come next year, Americans will want more new Christmas tree lights, and somebody—probably in China—is going to have to make them. [Source]

See more of Minter’s coverage of global recycling on his Shanghai Scrap blog.