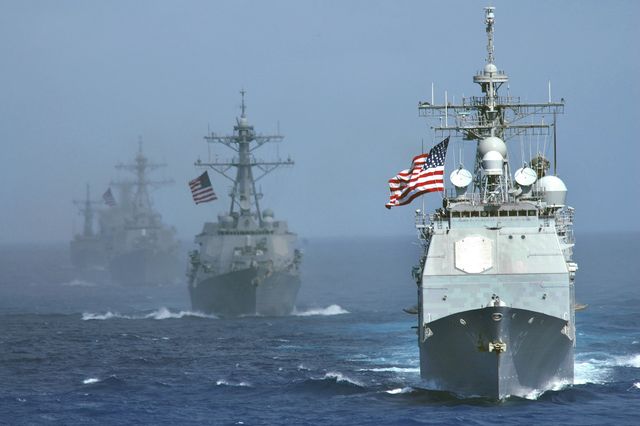 The incident last Friday, which was resolved peacefully, was the latest sign of Chinese military aggression in international waters and airspace.

[…] The Cowpens was in international waters when one ship from a group of Chinese Navy vessels headed toward it. The Chinese ship failed to stop, even after being warned by radio from the Cowpens that it was getting too close.

According to the Navy official, the Cowpens commanding officer issued orders for an “all stop” when the Chinese ship was less than 500 yards off its bow. [Source]

The Washington Times similarly described the Chinese action as “harassment” and “aggression,” but noted that the incident occurred while the American vessel was engaged in surveillance of China’s Liaoning aircraft carrier, and quoted a U.S. admiral who played down maritime tensions:

[…] Locklear, who is known for his conciliatory views toward the Chinese military, sought to play down recent disputes. When asked if the Chinese activities [near Guam and Hawaii] were troubling, he said: “I would say it’s not provocative certainly. I’d say that in the Asia-Pacific, in the areas that are closer to the Chinese homeland, that we have been able to conduct operations around each other in a very professional and increasingly professional manner.” [Source]

[Updated at 01:06 PST, December 14:] Observers interviewed by Bloomberg’s David Lerman and Tony Capaccio were less sanguine about the current situation:

“It’s getting dangerous out there,” said Patrick Cronin, a senior adviser for the Asia-Pacific Security Program at the Center for a New American Security in Washington. “Accidents happen. People can get killed out there through these maneuvers. We need more efforts at ways to tamp down or avert crises as they arise.”

Cronin said the incident appeared to be a “tit-for-tat” response to the U.S. refusing to recognize China’s new air defense zone.

“We’re making them look impotent with respect to the ADIZ,” Cronin said, referring to the acronym for air defense identification zone.

By trying to block a U.S. ship, China is engaging in “coercive diplomacy — it’s neither war nor peace,” he said. [Source]

At The Diplomat, though, U.S. Naval War College professor James R. Holmes argued that accidents are not the main threat:

This is serious business. U.S. officials continually harp on the need to work out procedures whereby American and Chinese reduce the chances and ill effects of “miscalculation.” Maybe so. But the main problem in maritime Asia isn’t miscalculation, it’s calculation. The ADIZ, the Senkakus, Scarborough Shoal — none of these are accidents. They’re policies made in China. By all means, let’s work out hotlines and incidents-at-sea agreements in Asia, if possible. But let’s not kid ourselves about their prospects for success. […] [Source]