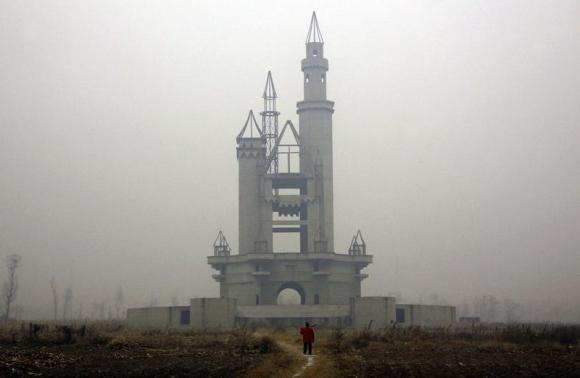 Smog was making Chinese people equal since it affected the lungs of both rich and poor, the article argued. It was sobering since it made Chinese reflect on the cost of their country’s economic boom. It was also a boon for Chinese humour, since residents of mainland China were turning to comedy in order to keep “light hearts” in the face of what has been dubbed the “airpocalypse”.

“Our knowledge of meteorology, geography, physics, chemistry and history has grown [because of pollution] and the standard of our English has improved too,” the author argued. “Without this haze, would you know what PM2.5 was? Would you know that 60 years ago the haze claimed 12,000 lives in London? Would you even know the words “haze” and “smog”?” [Source]

A small Wuhan newspaper questioned the purported mental benefits on its Sina Weibo account according to David Wertime at Tea Leaf Nation: “Only someone poisoned by the smog would be stupid enough to say something like this.” Wertime also highlighted the possibility that the article may have been meant as a joke. If so, CCTV’s state media peers were not laughing. From Ben Blanchard and Huang Yan at Reuters:

“Is the smog supposed to lift if we laugh about it?” wrote the Beijing Business Today, published by the city government’s official Beijing Daily. “Smog affects our breathing. We hope it does not affect our thinking.”

[…] Even the main Xinhua news agency – which had initially picked up CCTV’s commentary – weighed in, writing on one of its official microblogs late on Monday that it was “totally inappropriate” to make fun of air pollution. [Source]

Missile guidance that relies on human sight, infrared rays and lasers could be affected by smog in varing degrees, the article said. It explained that tiny particles in the air contributing to air pollution could hinder missile guidance systems.

[…] The article also said that during the first Gulf war, sand storms reduced the identification distances of thermal imaging equipment on US tanks from 2,500 metres to 800 metres, while optical detection of Iraqi tanks was reduced to almost nil.

[… A] reader who commented on the article said: “But enemies wouldn’t need to resort to missile attacks if the smog continues to increase – people will simply be poisoned to death.” [Source]

In any case, readers were assured, smog will not smother the road toward the Chinese Dream.

The infamous London fogs of the past referred to in the CCTV piece have become a popular reference point for China’s current problems. At Foreign Policy, J. Dana Stuster recently posted a gallery of paired photographs showing the smog in London in 1952 and China today. At China Rhyming, Paul French highlighted an 1890 poem on a London “pea-souper” by Huang Zunxian:

I sit by myself and write words in the air.
The fog is so dense, London is blacker than lacquer;
The cold is so bitter, it dims my fire.
I raise my head to gaze at a wild goose,

Soaring high in the sky, it rides the wind homeward. [Source]

Last week, photos comparing today’s masked mainlanders wallowing in thick smog to the Londoners facing the similar situation in the 1950s and 1960s went viral on the internet. The smog killed thousands of people in Britain before the authorities there took decisive steps to introduce the Clean Air Act to bring pollution under control.

It is time that the mainland leadership learnt from those lessons and takes steps to introduce China’s own Clean Air Act. After all, what good is achieving Xi’s Chinese “dream of rejuvenation” if people cannot breathe the air or drink the water. [Source]

But with existing environmental laws unevenly enforced, new ones may be of little use. From Xinhua:

“The smog is everywhere,” said Xiong Yuehui, head of the science and technology department of the Ministry of Environmental Protection, at a meeting on Sunday in Shanghai. “If one place is free of smog, then it will be a news,” he said.

The world’s second-largest economy does not lack the technology and funds needed to clean up the air, but lacks the implementation of concrete efforts, Xiong said.

Deepening cooperation between the Ministries of Environmental Protection and Public Security, which has prosecuted 667 pollution cases since June, made the front page of the Beijing Times last week, The China Story noted:

For a long time now already, the field of environmental protection has been plagued by the complexities of high costs to obey the law, low costs to break the law, and great difficulty in enforcing the law.

Reuters reported another new scheme under which mining companies would have to pay deposits to local governments, forfeiting them in the event of environmental damage.

Until the government can address the problem at its roots, Marketplace’s Rob Schmitz reported, more and more ordinary Chinese are taking matters into their own hands, and onto their own faces:

“A couple years ago, my wife and I made a tough decision to spend a big chunk of cash on hospital-grade air filters for our home. We put one in each of our sons’ rooms and one in our room when we sleep. So on Friday, when we had a horrible air day, and today, which wasn’t much better, I turned the filters on high and kept my 5-year-old home from school. He stayed inside all day. When I finally did venture outside, I noticed a surprising number of people here in Shanghai wearing the latest industrial air filtration masks. So the interesting thing here is that unlike a few years ago when many Chinese people that I knew would label the smog fog and not worry about it, it’s clear that now most people know that this is not just fog, and they’re taking precautions to protect themselves.” [Source]