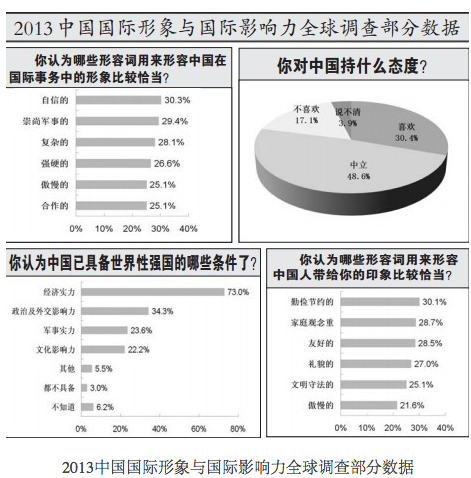 The AFP reports on the “China’s Global Image and International Influence in 2013” (2013中国国际形象与国际影响力全球调查) [zh], a recent survey by conducted by the Global Times. The survey’s results, published by the Global Times today, show global criticism of China—rare for state-run media content:

People around the world see China as “confident”, “belligerent” and “arrogant”, state-run media reported yesterday in an unusually direct survey of attitudes towards the country.

Only 13 per cent of respondents in the poll by the Global Times newspaper described China as “peaceful”, a sign that Beijing’s territorial disputes with its Asian neighbours have taken a toll on its image.

It also concluded that “the closer you are to China, the more likely you are to have a negative view of it”.

With the exception of rivals such as the US or Japan, state-run media coverage of relations with other countries normally concentrates on the positive, and it is rare for criticism of China to be reported.

But in the survey of 14,400 people in 14 countries, 30 per cent of respondents called China “confident” in international affairs, with 29 per cent describing it as “belligerent”, while “complicated” was chosen by 28 per cent.

“People also describe China with words such as ‘tough’, ‘arrogant’ and ‘co-operative’,” the paper added, with each of them chosen by about 25 per cent of respondents. [Source]

English-language coverage from the Global Times notes that this survey reflects China’s increasing concern about soft power, and shows correlation between the media outlets available to respondents and their impressions of China.

Titled “China’s Global Image and International Influence in 2013,” the poll is the first political survey conducted by a Chinese media agency on a global scale as the country grows increasingly more concerned about its soft power.

In comparison, only 12.1 percent of the respondents say they learn about China from “Chinese media programs broadcast in their native countries,” indicating the limited influence of Chinese media on the international stage.

“If most people learn about China from English-speaking news outlets, their image of China is naturally biased,” said Chu. “The influence of a country is related to the influence of its language. The more people are learning Chinese, the better they objectively understand China. [Source]

For more on state media, views of China, or international attitude surveys on China, see prior CDT coverage.