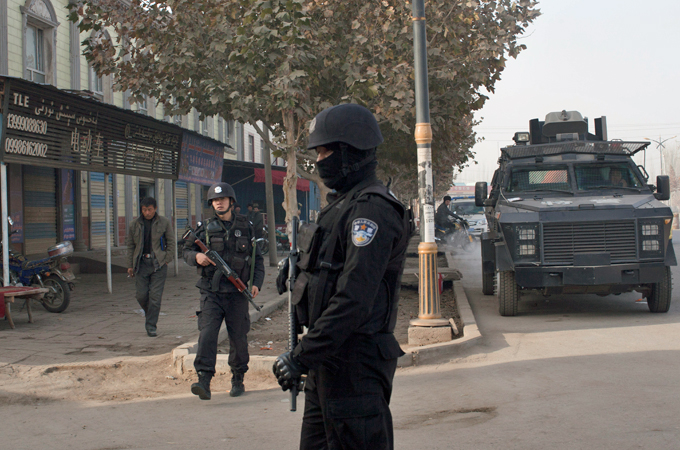 A heavy influx of Han immigration has long been a major source of ethnic tension in Xinjiang. Nikolay Korzhov at Al Jazeera reports that while Han Chinese are hitting pay dirt, some local ethnic Uyghurs are struggling to make ends meet:

According to the most recent statistics, published on the official Xinjiang Statistical Information website, economic conditions are gradually improving. For instance, income in the region is increasing by 6.3 percent. Jiang Fuqiang, 28, is a migrant worker from Sichuan province who has been working in Xinjiang for three months on a construction site. “I came to Xinjiang, because they pay here more. The salary is 7,000 yuan ($1,150) a month. It’s high because we worked longer hours, which we can’t do anywhere else in China,” he says.

[…] Like Aixie, many Uighurs in Xinjiang face difficult economic conditions. Sultan Hamit, 59, is wearing a thick, shabby jacket and a warm sweater underneath. His narrow face is red: The weather outside is freezing. He spends the whole day in the open air, working as a driver or carrying various goods with his motorcycle.

Every morning, after praying and eating breakfast, he takes his motorcycle with a small vehicle attached to the back and goes to the centre of the city. Sultan earns around 50 yuan ($8) per day. “I never went to school. For me, it’s the only way to earn some money,” says Sultan.

[…] Many Uighurs are convinced that the government is trying to wipe out their culture through assimilation and education policies. Every Monday, Sultan is required to attend a meeting for the “heads” of nearby villages, organised by local authorities. During the meeting they discuss the problems faced by villagers, and are instructed how to “live together” with Han Chinese. Sultan says he has to be there at 1pm every Monday, and that if he doesn’t show up he will be fined. [Source]

See more on Han-Uyghur tensions and Uyghurs’ grievances, which have sporadically flared into violence, via CDT.