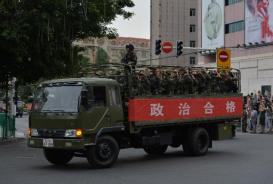 Sixteen people were killed outside Kashgar on Sunday in a clash between villagers and police. From BBC:

[…] Verifying reports from the region is difficult because the information flow out of Xinjiang is tightly controlled.

The brief report from the Tianshan news service on Monday did not give details of the alleged attack, but it appeared likely to be the latest spasm of ethnic violence in the region. The bloodshed occurred late at night in Shufu County near Kashgar, a part of Xinjiang beset with tensions between Muslim Uighurs and the government authorities.

The police in Shufu County were attempting to catch a criminal suspect when they were attacked by a group of “rioters” with explosives and knives, the report said. Two police officers died, while the police fatally shot 14 attackers and captured two others, according to the report. Investigations into the events were underway, it said. [Source]

The October attack at Tiananmen Gate which killed three people spurred debates over the use of the term terrorism to describe violent incidents involving Uyghurs.

Update (12/16/13 PST): The World Uyghur Congress, an exile group, issued a statement calling into question the official version of events, and stating that two of those killed were teenagers:

However, the WUC has been able to ascertain from sources on the ground that two of the demonstrators were teenagers, who were killed due to indiscriminate shooting by the security forces. “This further indicates, as in previous instances, that the Chinese security forces show no concern for the safety and wellbeing of demonstrators, rather choosing to shoot first, and ask questions later,” said WUC President and prominent Uyghur human rights activist Ms Rebiya Kadeer.

Although the WUC has not uncovered the reasons for which the demonstrators were protesting, the recent launch of new restrictions on religious observance should provide a clue in that regard; whilst due consideration must also be given to the fact that this remains one of the most repressed for Uyghurs, culminating in the extra-judicial killings of hundreds of Uyghurs, including youths, some of whom were buried without notifying their next of kin. Furthermore, the XUAR government has failed to disclose the reasons why the police were seeking the detention of the unspecified number of individuals. The XUAR government has also failed to specify how 14 demonstrators died so ruthlessly, when other governments around the world are able to both adequately address the desires of demonstrators whilst also peacefully controlling the protests themselves. [Source]