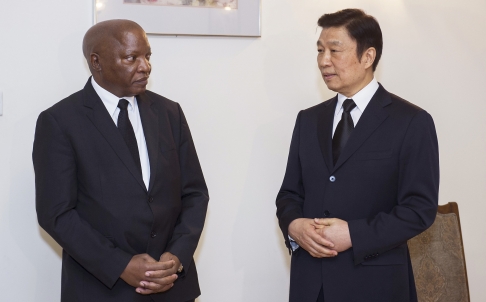 “They were both very strong leaders who fought for the liberation of their people, and who also contributed to laying the foundation for further development in society,” South African ambassador Bheki Langa was quoted as saying by China’s official news agency Xinhua.

He added that Mandela, whose death was mourned on Tuesday in Soweto by dozens of world leaders – not including China’s President Xi Jinping – “valued the contribution the Chinese people, government and Party had made in ending the obnoxious system of apartheid in South Africa”. [Source]

Many Chinese internet users have noted the apparent contradiction of Beijing lauding Mandela’s legacy at the same time that it continues a harsh crackdown on its own human rights activists.

Microbloggers have particularly alluded to Liu, whose name is banned from appearing online by government censors.

The Global Times, a nationalist-leaning tabloid published by the Communist Party’s official People’s Daily, said it was totally wrong to cast Liu and Mandela in the same light. [Source]

To prevent the news of Mandela’s death from generating discussions on human rights issues, the Chinese Central Propaganda Department has instructed media outlets to “exercise caution while gathering material and reporting news on the December 5 death of former South African President Nelson Mandela.”

The Washington Post has more on the Global Times editorial:

But the former South African president, the nationalist Global Times newspaper argued on Wednesday, was definitely not to be compared to China’s jailed Nobel Peace Prize laureate Liu Xiaobo, the fifth anniversary of whose imprisonment fell in the same week as Mandela’s funeral. Western media were wrong to cast Liu as China’s Mandela, it argued.

“Mandela was a Nobel Peace Prize laureate for leading African people to anti-apartheid victory through struggles, tolerance and efforts to bridge differences,” it wrote in an editorial. “However, awarding a Chinese prisoner who confronted authorities and was rejected by mainstream Chinese society derides China’s judiciary system.” [Source]

However, The Economist notes that Mandela did not always stand by the ideals of freedom and justice when it came to conducting diplomacy with China:

Mr Mandela was a source of inspiration to many Chinese dissidents. Yet during his decades-long involvement with China, he often found himself taking positions that surprised and disappointed many of his admirers.

“Mandela was an old friend of the Chinese Communist Party, not a friend of the Chinese people,” one overseas Chinese human-rights activist says. Upon meeting him in Oslo in 1991, the activist asked Mr Mandela to speak up for Chinese dissidents. Mr Mandela explained that while the West ignored him until his success was all but certain, China’s Communist leaders had supported him financially and morally from the very beginning. Therefore, he was not about to work against them.

Except for a single meeting with the Dalai Lama, in South Africa in 1996, Mr Mandela said or did little to upset China. On multiple occasions since then (including this week’s memorial service for Mr Mandela), the Dalai Lama sought but failed to receive a visa for a return to South Africa. [Source]