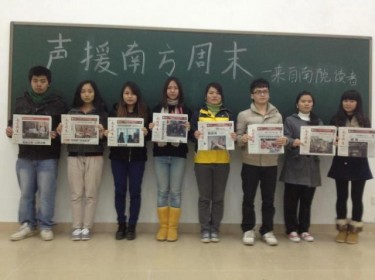 Almost one year ago, protests erupted at Southern Media Group over the heavy-handed censorship of an editorial at the Southern Weekly. Activists Guo Feixiong, Liu Yuandong, Sun Desheng were later detained on suspicion of “assembling a crowd to disrupt order in a public place,” apparently because of their role in the protests. While Southern Weekly editors initially called for public support against the actions of the propaganda department, the newspaper’s management subsequently submitted written testimony to police calling the protests disruptive. From Global Voices:

The Southern Media Group, which owns Southern Weekend, issued testimony in November 2013 that helps the prosecution of activists who took part in an anti-censorship protest in early January outside corporation’s building. Southern Weekend had issued an editorial appeal for readers’ support against the provincial propaganda department’s pressure to rewrite its New Year editorial.

[…] According to the written testimony submitted to the police, which was made public on [December] 27, 2013 via Wen Yunchao, the public gathering outside the building between January 6 to 9 obstructed their daily work as people and vehicles could not enter freely from the front gate. The company had to open the side gate for their staff and some meetings and activities were cancelled.

Several journalists, including former staff of the Southern Media Group, have spoken out against the statement in support of Guo, Liu and Sun. Global Voices translates:

Wen Yunchao has been keeping track of reporters and editors who have spoken out against the statement. Within a day, about 20 employees from the Southern Media Group had bashed the paper’s testimony. She Feike, who was also working at one of the media outlets owned by the Group in January 2013, wrote:

I resigned around the end of February and left my position officially at the end of March. The incident happened in January and I was still a member of the editorial team in the Southern Metropolis Weekly which is also owned by the Southern Media Group. From what I witnessed, I did not see any disruption from outside forces that affected our magazine’s production. The news beat operated normally. As one of the former Southern Media Group’s employees who had signed the statement [against censorship], I am grateful to Liu Yuandong and Guo Feixiong, among other citizens who expressed their support to the media group. [Source]

Read more about the Southern Weekly protests in January 2013, via CDT.