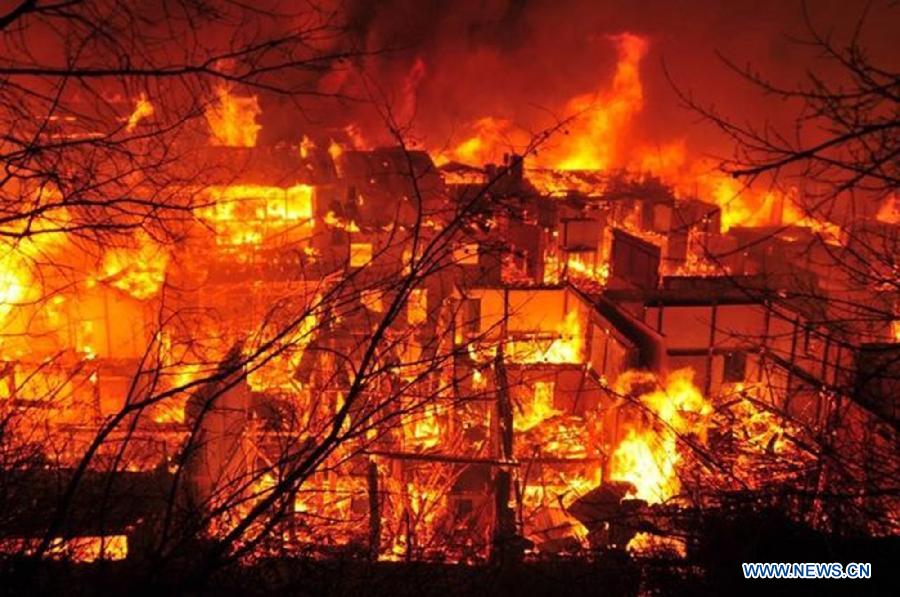 Dukezong in Shangri-la County, Yunnan, is a town which was built during the Tang Dynasty along the old Tea Horse Road and has become a tourist attraction in recent years. Early Saturday morning, a massive fire broke out in the old Tibetan town, where buildings are mostly built of wood. Xinhua posted photos of the fire but few details are known. No casualties have been reported:

The fire broke out around 1:30 a.m. at the Dukezong Ancient Town, where most houses are made of wood, adding difficulties to the fire fighting, said a local government spokesman.

More than 1,000 people were battling the fire. However, it was still spreading at 10 a.m., said the spokesman, adding the windy weather also hampered firefighting efforts.

There were no immediate reports of casualties, and residents and commercial tenants in the town had been evacuated. The cause of the fire is being investigated. [Source]

See photos of Dukezong before the fire via Yunnan Adventure website.

This is the second major fire in a Tibetan region in two days, and the fourth in eight months, though there has been no indication that they were intentionally set or of any links between them. A fire also broke out at a Tibetan Buddhist institute in Sichuan on Thursday. From the South China Morning Post:

The fire reportedly happened at 7.30pm at Seda Larung Wuming Tibetan Buddhist Institute in Seda county, also known as Sertar, in the Garze Tibetan Autonomous Prefecture in Sichuan Province. It is the largest such institute in the world and home to some 10,000 nuns and monks.

The blaze destroyed more than a dozen buildings, which some reports said were living quarters for student monks or nuns. No casualties have been reported as yet. [Source]

Update: The New York Times reports on the Dukezong fire:

Dukezong is an ancient Tibetan neighborhood of two- and three-story wooden buildings on narrow, cobbled streets. With some 3,000 permanent residents, it lies next to a much larger, modern town, also called Shangri-la, which is dominated by Han Chinese residents and drab modern buildings. The broader area is called Gyaitang Zong in Tibetan. The Shangri-la area is called Gyalthang in Tibetan.

“After the fire broke out, even though many rushed to help at the first instant, the dry conditions and the speed of the blaze allowed it to spread rapidly in all directions,” said a report on the news website of the Yunnan government, citing officials in the county.

The initial reports gave only a sketchy estimate of damage. Xinhua, the state-run news agency, said hundreds of dwellings were apparently destroyed. Pictures on Chinese news websites and social media services showed the fire tearing through the town, flames reaching into the sky, and an aftermath of smoky ruins and collapsed homes. About 100 homes burned down, wrote one user of Sina.com Weibo, a popular Chinese microblog service, who said she was in the area. [Source]