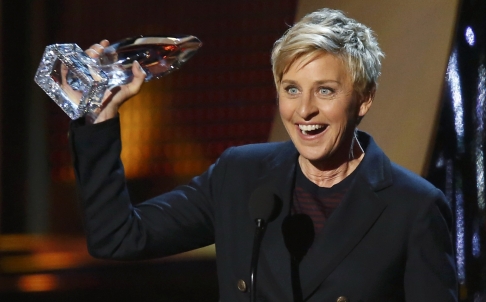 The Ellen DeGeneres Show, a popular celebrity-focused American television talk show, has become the first of its kind to air in China, via Sohu. Darren Wee at South China Morning Post reports:

The eleventh season of Ellen can now be video-streamed on demand on Sohu.com, 48 hours after it airs in the United States.

DeGeneres greeted her new audience with a “Ni hao, y’all” after announcing the deal on her show, adding that she wanted to learn more Chinese.

“It’s basically the same show, but it’ll have subtitles and it will be called the Happy Lady Dance Hour,” joked the 55-year-old comedian, who will also host the Oscars next month.

[…] Charles Zhang, chairman of Sohu, said: “The Ellen DeGeneres Show is one of the most well-known talk shows in the US and we believe it could also have strong appeal and relevance with the Chinese audience.” [Source]

TIME’s Lily Rothman suggests that the show’s wider availability might lend momentum to already broadening acceptance of homosexuality in China:

[…] DeGeneres, particularly when it comes to her personal life, is equally as known for speaking up as she is for having a good time. For example, when an anti-gay group advocated in 2012 for JCPenney to fire her as their spokesperson, she addressed the conflict on-air. In less weighty moments, her relationship with wife Portia de Rossi is frequent fodder for the show. And that openness makes Ellen matter — especially since a spokesperson from Sohu tells TIME in an email that, “as far as I know,” Ellen will not be edited for the Chinese audience, beyond the addition of the subtitles. (Warner Bros. did not yet respond to requests about the same question.)

[…] If Ellen is a hit in China (in the U.S., it’s still setting ratings records in its 11th season) and if Ellen really does get shown on Sohu intact, “Ellen and Portia go hiking” and all, it could have an impact beyond its viewership — and that’s something we’re betting would make the “happy lady” of the “happy lady dance hour” even happier. [Source]