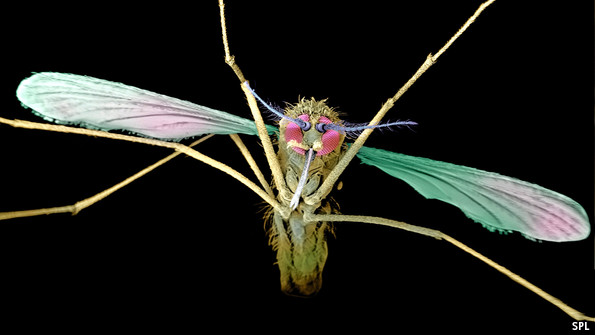 Li Guoqiao, a researcher at Guangzhou University of Chinese Medicine, is developing a groundbreaking new approach to combat malaria, which currently kills about 660,000 people a year and costs Africa $12 billion a year. The Economist explores his work:

The current approach to dealing with malaria is to control the mosquitoes (one of which is pictured above) that spread it—either by killing them with chemical insecticides or by draining the bodies of stagnant water that their larvae live in. That has worked in many places. In Europe, for example, malaria once existed as far north as Murmansk, in Russia. Now it is rare-to-non-existent. But it was never the plague in Europe that it is in Africa, and on that continent mosquito-control programmes may need a helping hand.

Dr Li’s approach is to attack not the mosquito, but the disease-causing parasite itself. This parasite’s life cycle alternates between its insect host (the mosquito) and its vertebrate one (human beings). Crucially, as far as is known, humans are its only vertebrate host. Deny it them and it will, perforce, wither away—an approach that worked for the smallpox virus, which had a similarly picky appetite. In the case of smallpox, a vaccine was used to make humans hostile territory for the pathogen. Since there is no vaccine against malaria, Dr Li is instead using drugs.

[…] And it works—almost. The Comoros has three islands: Moheli, Anjouan and Grande Comore. Before the experiment started, more than 90% of the inhabitants of some villages on these islands had malaria. Song Jianping, Dr Li’s lieutenant in the Comoros, blitzed Moheli with Artequick in 2007. The number of cases there fell by 95%, though reinfection from other islands caused a small subsequent rebound. In 2012 he did the same thing on Anjouan. There, the number of cases fell by 97%. In October 2013 the campaign moved to Grande Comore, the most populous island. When the process is complete there, nearly all of the 700,000 Comorans will have taken part in FEMSE. [Source]