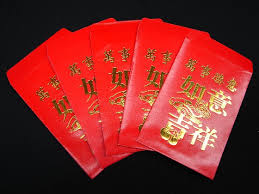 As the Year of the Water Snake comes to a close, the South China Morning post notes the environmental cost of China’s age-old tradition of handing out red envelopes on Lunar New Year. The SCMP report looks at a Hong Kong environmental group’s campaign to educate and encourage the reuse of envelopes in the Special Administrative Region, where an expected 320 million envelopes will be made from the pulp of 16,300 trees this year:

Hongkongers are killing 16,300 trees each year as they exchange some 320 million red envelopes among family and friends during the Lunar New Year holidays, according to a green group’s survey.

The 2013 poll was conducted among 808 respondents by Greeners Action, a charitable environmental conservancy which is pushing for the reuse of paper envelopes. The red packets, or lai see, usually stuffed with money and inscribed with auspicious symbols, are given as a gesture of luck and goodwill.

“The estimated usage of red envelopes has increased from 180 million in 2012 to 320 million last year and the trend is worrying,” said Angus Ho Hon-wai, executive director of the group.

[…] Close to half of the respondents said they were given the envelopes – mainly by banks, housing estates, shops and restaurants, and even by their local district council offices and other government organisations.

[…] Since 2010, the group has been running a programme to encourage the collection and reuse of red envelopes in the city. [Source]