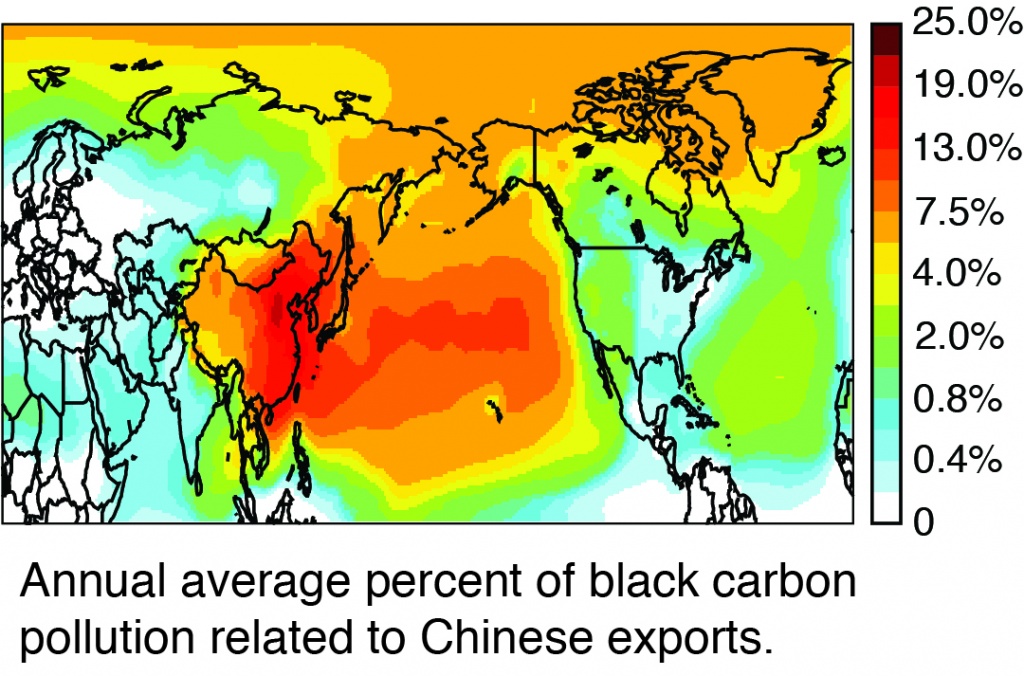 A new study investigates the environmental impact of outsourced manufacturing both in China and in the United States, and finds that while air quality in the eastern U.S. has improved as a result, the west coast’s has suffered. “We’ve outsourced our manufacturing and much of our pollution, but some of it is blowing back across the Pacific to haunt us,” co-author Steve Davis said in a press release. “Given the complaints about how Chinese pollution is corrupting other countries’ air, this paper shows that there may be plenty of blame to go around.” From Edward Wong at The New York Times:

The latest paper explores the environmental consequences of interconnected economies. The scientists wrote that “outsourcing production to China does not always relieve consumers in the United States — or for that matter many countries in the Northern Hemisphere — from the environmental impacts of air pollution.”

[…] The study’s scientists also looked at the impact of China’s export industries on its own air quality. They estimated that in 2006, China’s exporting of goods to the United States was responsible for 7.4 percent of production-based Chinese emissions for sulfur dioxide, 5.7 percent for nitrogen oxides, 3.6 percent for black carbon and 4.6 percent for carbon monoxide.

[…] Alex L. Wang, a law professor at the University of California, Los Angeles, who studies Chinese environmental policy, said after reading the new paper: “This is a reminder to us that a significant percentage of China’s emissions of traditional pollutants and greenhouse gas emissions are connected to the products we buy and use every day in the U.S. We should be concerned, not only because this pollution is harming the citizens of China, but because it’s damaging the air quality in parts of the U.S.” [Source]

A draft report from the Intergovernmental Panel on Climate Change also highlights outsourcing of CO emissions from the West. From The Guardian’s Suzanne Goldenberg:

Outsourcing of emissions comes in the form of electronic devices such as smartphones, cheap clothes and other goods manufactured in China and other rising economies but consumed in the US and Europe.

[…] Since 2000, annual carbon dioxide emissions for China and the other rising economies have more than doubled to nearly 14 gigatonnes a year, according to the draft report. But about 2 GT a year of that was produced making goods for export.

[…] There is now growing debate about how to assign responsibility for emissions generated producing goods that were made in one country but ultimately destined for another.

“The consumers that are importing those goods have some responsibility for those goods that are happening outside of our boundaries,” [the World Resources Institute’s Cynthia] Cummis said. [Source]

Pollution outsourcing has also taken place within China, with dirty industry frequently “swept under the rug” into rural areas.