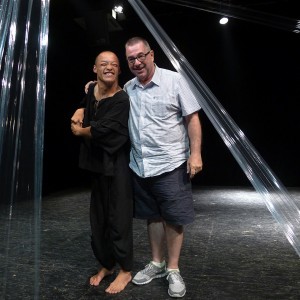 The China Story interviews Paul Mooney, who was recently denied a visa to work as a journalist in China after living there for more than 20 years, about his life and work:

On his favorite memory

I’d done a story on disabled people in China in 2008 and got to know Xi Fu 希福, who was handicapped as a child, but who became an excellent foot painter and modern dancer. I met him in the Jianwai Underpass where he sold his calligraphy and we became friends after I wrote a story about him. One night, he invited me to Jiangjingjiu, a small rustic bar beside the Drum and Bell Towers. There was a Xinjiang band playing that night that used some Uyghur instruments, as well as a musician who played a traditional Shaanxi horn. The music was amazing and people were dancing in between the tables in the tiny bar where there wasn’t an inch of free space, including the ever-smiling Xi Fu.

The mood was ecstatic and I was so happy to see so many young Chinese be so spontaneous, carefree and happy. I sat against the wall with a bottle of beer in my hand, soaking it all in, thinking to myself that this was why I loved being in Beijing. [Source]