Retracing the Long March by Motorcycle 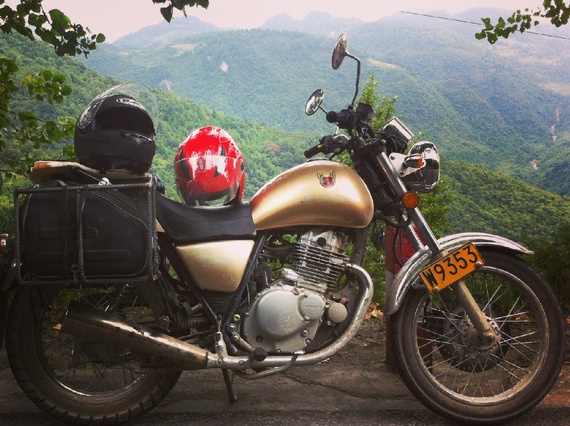 Adam Century followed the route of the Communists’ legendary retreat across 11 provinces in 1934-35, from Ruilin in Jiangxi to Yan’an in Shaanxi. He describes the journey at The Atlantic:

Today, the Long March is the closest thing the People’s Republic has to a national creation myth. It was during this trek that Mao solidified his position in the Communist Party leadership, and to this day, in a nod to symbolism, Chinese leaders often announce new policies from key sites along the famous route. For decades, the Long March has been a critical element of the Communist propaganda narrative, providing the Party with a veneer of ruggedness and frugality at a time when its top leaders have become a pampered elite.

This summer, in an attempt to better understand the Long March’s evolving legacy in contemporary China, I retraced the entire route by motorcycle, traveling from Jiangxi province to Yan’an, the Shaanxi city that served as the Communist headquarters from 1936 to 1948. As I rode my motorcycle across the countryside, stopping at every village, city, and site associated with the march, I found evidence of a myth in decline: new, cavernous Long March museums devoid of visitors; memorials crumbling from neglect, weeds sprouting from their bases; and, most strikingly, the complete disengagement—even disdain—of China’s youth. [Source]