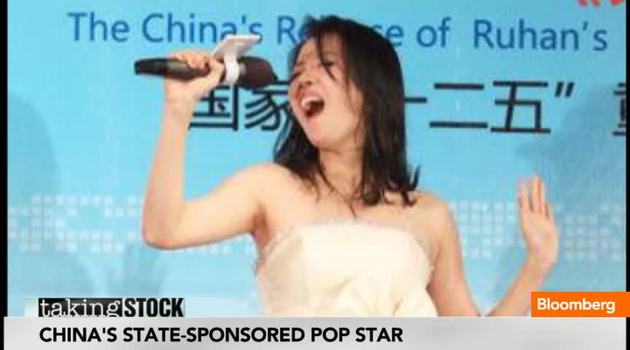 After the Global Times released poll results late last year showing the international perception of China to be less than favorable, Xi Jinping vowed to invest in the nation’s soft power. At a high level meeting, President Xi  laid out a list of measures to bolster China’s influence, including a call to “push the cultural industry forward into prosperity” (推动文化事业全面繁荣) [zh]. For BBC World, Georgia Catt reports on Ruhan Jia, a singer China hopes to propel into global pop-stardom:

She doesn’t drink, smoke, or go to nightclubs. Her life is dominated by one aim, to become a global hit in the West – and she has the power of the Chinese state behind her.

[…] In 2011, Ruhan became the first artist to be signed to Earth’s Music, a state-backed initiative to produce Chinese musicians that can crack the international music market.

It’s part of an attempt to increase China’s soft power – its cultural appeal around the world. The Earth’s Music project is seen as so important that it’s even said to have been included in the current five-year economic plan.

“But only when you are strong culturally are you seen as a superpower.” […] [Source]

Also listen to a BBC World podcast (available until Monday, February 2) on Jia and her early career as a state-sponsored pop star, also produced by Georgia Catt.

The Diplomat notes that Jia’s hard-earned talent and early career success attracted Synergy to recruit her into a soft cultural campaign that is written into the current five-year plan:

“I grew up in something like a work camp. My parents pushed me very hard,” Ruhan said. “All I did was go to school and study music.”

Ruhan would go on to perform across the globe, with her rise to stardom including collaborations with famed composer Damon Albarn (known for his work with Blur and Gorillaz), recording the theme song for the 2008 Beijing Olympics, and participating in the 2011 Grammy Award-winning album “Calling All Dawns.”

Shanghai Synergy doesn’t shy away from Ruhan’s purpose as the group’s only artist, with her biography stating that “the goal is to release these productions in the worldwide market.” [Source]

In 2012, Bloomberg Businessweek ran a lengthy profile on the singer and her state-owned label’s ambitious plan as she was making her American debut. For coverage of another Asian nation’s recent soft power victory and the Chinese soul-searching it inspired, see “China’s Gangnam Style and & the K-Pop War Machine,” via CDT.