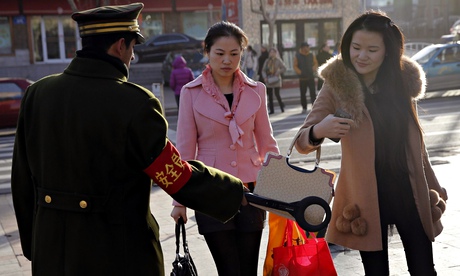 Six people were killed by police in Aksu, Xinjiang after throwing explosives, state media are reporting, while six more were killed in separate bomb incidents. From The Guardian:

Assailants threw explosives at police in Xinhe county in the Aksu prefecture on Friday, triggering a clash in which police killed six and captured five suspects, according to the Tianshan news outlet, which is run by the regional Communist party.

Another six people died in blasts, the news outlet said, without providing details.

The official Xinhua news agency reported that the Uighur town of Xinhe had been shaken by three blasts that hit a hair salon, a produce market and a vehicle that exploded after it was surrounded by police. The case is under investigation. [Source]

The Global Times, owned by Chinese Communist Party mouthpiece the People’s Daily, said two explosions had occurred in a beauty salon and a grocery market in Xinhe on Friday evening.

Dilxat Raxit, spokesman for the main Uighur exile group, the World Uyghur Congress, suggested that the beauty salon was a front for a brothel that had offended Uighurs “as it directly affected the Uighurs’ traditional lifestyles”.

Also on Friday, border guards in neighboring Kyrgyzstan said that a group of Uyghurs were killed after crossing the border and that their belongings indicated that they belonged to a separatist group.

These are the latest in a series of violent incidents in Xinjiang, which authorities blame on separatist, or terrorist, groups, though few details are released about individuals involved or the events themselves, and journalists are not allowed to independently investigate.

Meanwhile, in Beijing, the label of “separatist” has been applied to Ilham Tohti, an Economics professor who was detained earlier this month. The Public Security Bureau of Urumqi city has accused Tohti of separatism and inciting ethnic hatred for his work advocating for the rights of Uyghurs. From the New York Times:

Mr. Tohti has been held incommunicado since Jan. 15, when police officers escorted him from his apartment on the campus of Minzu University of China.

The news that he is likely to face charges of separatism comes at a time of intensifying bloodshed in Xinjiang despite a growing security presence by Chinese soldiers and paramilitary police officers. On Friday, 12 people were killed in a town not far from Xinjiang’s border with Kyrgyzstan in what officials say was a clash involving explosive devices. A state-run news portal said that the police shot and killed six people in Aksu Prefecture, and that six others died in what were described as three explosions. The accounts provided scant details.

Mr. Tohti’s detention coincides with a broad assault on dissent by the new leadership under Xi Jinping, the Communist Party secretary who assumed power in November 2012.

[…] A vocal advocate for China’s embattled Uighur minority, Mr. Tohti, 44, was the rare public figure willing to speak to the foreign news media about the Chinese government’s policies in the vast region that borders several Central Asian countries. He was also the target of frequent harassment by the Chinese authorities, especially after he helped establish Uighurbiz.net, a website for news and commentary on Uighur issues. [Source]

Global Times issued a broadside accusing Tohti of a range of crimes linked to his teaching and writing:

But Tohti’s wife has denied the accusations. From the South China Morning Post:

“I have no idea, he is only a university lecturer … All the courses he taught were arranged by the university. How could he say those things [as the police have alleged]?” she asked.

She added she had no idea where her husband was until the statement last night indicated that he had been detained by the Urumqi police.

She and her two children are now under round-the-clock surveillance by the police. “It will be Spring Festival soon and we miss him so much,” she said. [Source]

The Lowy Interpreter provides a broader context for Tohti’s detention and the recent violence:

Authorities have gone so far in their attempts to link unrest to external sources that they’ve claimed up to 100 Uyghurs have travelled to Syria to sharpen their ‘terrorist skills’. While it is difficult to either confirm or refute this claim, it is possible to confirm that at least some of the unrest has been the result of the government’s heavy handed anti-religious campaigns in the region. A recent example is the ‘Project Beauty’ campaign, aimed at discouraging mostly Uyghur women from wearing traditional headscarves or veils.

Second, in the aftermath of the July 2009 Urumqi ethnic riots which resulted in the removal of long serving Xinjiang CCP Chairman, Wang Lequan, Beijing appointed as Xinjiang party boss the reputably reform-minded and media-savvy Zhang Chuxian [sic, actually Zhang Chunxian (张春贤)]. This initially raised hopes that ethnic tensions in the region could be soothed by Zhang’s lighter touch and sensitivity. This was quickly dispelled with Zhang’s return to familiar strategies and political slogans, such as his 2011 call for the party to institute ‘flexible iron-fisted rule’ in Xinjiang. In policy terms this has amounted to the continuation of long standing emphases on the twin strategies of accelerated economic development and zero tolerance of overt ethnic minority dissent.

The ongoing incidents of unrest and violence have prompted the regional government to announce on 17 January that it will double the public security bureau’s ‘counter-terrorism’ budget for 2014 in an effort to ‘curb the spread of religious extremism as well as prevent severe violent terrorist attacks and mass incidents from happening’. But perhaps more worrying for China’s Uyghurs is the language the authorities are now deploying to describe their approach to Xinjiang’s problems. In announcing the budget increase, Nur Berki, chairman of the Xinjiang regional government, stated that the authorities ‘must constantly strike hard against violent terrorism, showing no mercy, in accordance with the law, and maintaining a high-handed posture’. [Source]

In Foreign Affairs, Kendrick Kuo writes about the impact that Zhang Chunxian’s policies have had in Xinjiang:

For Uighurs and human rights activists, Zhang put forward a number of encouraging reforms. He enacted a pollution-control system, supplied natural gas to Uighur households, overhauled the tax regime on natural resources, and campaigned against corruption. These policies sought to counter Uighur accusations of Chinese extractive colonialism. Along the way, local and national media outlets were quick to buy into Zhang’s populism, which he buttressed with carefully staged visits to Uighur communities and farming households. On the second anniversary of the 2009 riots, Zhang even appeared at a food court in Urumqi, handing out kebabs and beer to promote investment in Xinjiang.

But Zhang’s policies have failed to address the major sources of Uighur discontent. Many Uighurs still consider their language and religion to be under attack. Under Zhang, the regional government has set a minimum age for attending mosque, prohibited Arabic language instruction, and made it difficult for Uighurs to fast during Ramadan, especially in schools. Bilingual education has not only failed to reverse Uighur disadvantages in the job market, but also convinced many Uighurs that the government is attempting to phase out their language. Meanwhile, most of the wealth generated by Zhang’s policies has gone to the Han, and the Uighurs still disproportionately occupy the lower rungs of the economic ladder. And Uighur violence has continued. [Source]