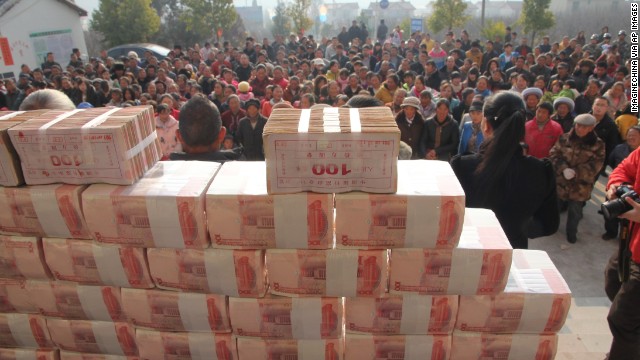 Naomi Ng reports for CNN that farmers from Jianshe Village in Southwest China have “literally turned a multimillion dollar windfall into a wall of cash” after investing in farmland and small-scale hydropower plants since 2010:

Around 340 out of 483 households are shareholders in the small village, which has a population of less than 2,000 people.Before they could distribute their earnings to individual residents ahead of Chinese New Year, they had the problem of where to store — and guard — it.Chief villager, Jin Hongyuan, told local media he moved the money inside the village committee office after transporting it from the bank on Monday. To keep the money safe, he appointed three villagers to sleep on the banknotes inside the office, while four others stood guard outside.”We used 800,000 yuan as a mattress, 420,000 yuan as pillows, and put the others aside,” Jin told the West China Metropolis Daily. [Source]

The BBC adds that netizens have even compared the villager's success in Sichuan to Mao Zedong's revolution in the countryside:

“This almost seems like an incentive to encourage one to go rural, as though it is embodying one of Mao's rural economic models,” said FengYiCaoMing.”Socialism is back!” said YiMeng Wang, another microblogger.Weibo user 2009TheGoodLife said: “It seems rural cities now have more money. It makes me want to be a farmer too.” [Source]