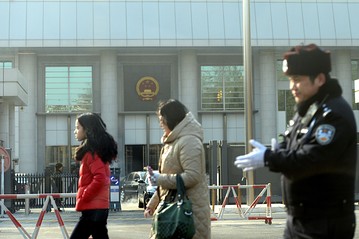 At China Real Time, Stanley Lubman comments that the recent trials of Xu Zhiyong and other New Citizens’ Movement activists show how the Party “continues to twist the use of the criminal law and procedure to meet the perceived needs of the moment.”

The Beijing First Intermediate People’s Court’s decision to sentence activist Xu Zhiyong to four years in prison for “disturbing public order” by encouraging demonstrations against official corruption by his supporters in the New Citizens Movement surprises no one. The heavy-handed violations of Chinese criminal procedure law that marked the case, both before and during the trial, were part and parcel of the departures from Chinese law that have often marked prosecutions of activists protesting official illegality. Defense lawyers were barred from cross-examining prosecution witnesses and from calling witnesses of their own. The authorities also violated Chinese law by holding separate trials, which prevented the defendants from providing testimony that could be useful to one another’s defense.  The instrumental manipulation of procedure is depressingly familiar.

[…] The crackdown on Xu and other social activists illustrates one of the most serious aspects of the current state of Chinese criminal procedure:  The primacy of the Party in the criminal process is shown in full force when it is brought to bear on activists for allegedly violating public order, disclosing state secrets and other offenses against the security of the Party-State.  This means that Party policy continues to shape the conduct and outcomes of criminal cases, with disregard for procedural justice.  The Party’s rhetorical  support of the rule of law — often extolled in Party statements— is consistently and glaringly violated in practice. [Source]