Is Cantonese a Dialect or a Language? 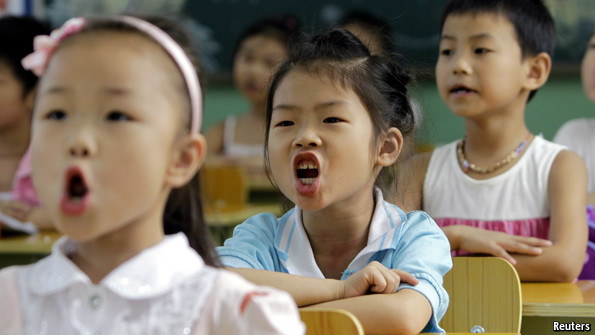 Early this month, Hong Kong’s Education Bureau deleted an article from their website after it exposed a legal grey area inhabited by spoken language and attracted much criticism from locals. The article, posted on the bureau’s Language Learning Support page on January 24, claimed that “Cantonese is not a official language” (according to the Hong Kong Basic Law, English and Chinese are the two official languages of the Special Administrative Region). The South China Morning Post reports:

[The article] aimed to promote the importance of bilingualism and trilingualism as the city “develops alongside the rapidly growing China” and “the daily usage of Mandarin [in Hong Kong] becomes common”.

[…] It said: “Although the Basic Law stipulates that Chinese and English are the two official languages in Hong Kong, nearly 97 per cent of the local population learn Cantonese (a Chinese dialect that is not an official language) as their commonly used daily language.”

[…]The Basic Law says that as well as written Chinese, English may be used by the executive, legislature and judiciary. But there is no rule about verbal language, such as Cantonese.

Eric Cheung Tat-ming, principal law lecturer at the University of Hong Kong, said the law related only to the written word in terms of “official languages”.

“There have never been attempts to define what official languages mean in the oral context,” Cheung said. “And in Hong Kong courts, as well as other official circumstances, the choice of the spoken language has been one based on commonality, so Cantonese is preferred.” [Source]

In effort to see whether the Basic Law’s stipulation that “Chinese” is an official language would by definition include the speech exchanged by a majority of Hong Kong residents, a blogpost from The Economist examines the contentious criteria differentiating dialect from language:

Whereas some people say that Cantonese is a dialect of Chinese, others insist that it is a language in its own right. Who is right—and how do dialects differ from languages in general?

Two kinds of criteria distinguish languages from dialects. The first are social and political: in this view, “languages” are typically prestigious, official and written, whereas “dialects” are mostly spoken, unofficial and looked down upon. […] Linguists have a different criterion: if two related kinds of speech are so close that speakers can have a conversation and understand each other, they are dialects of a single language. If comprehension is difficult to impossible, they are distinct languages. Of course, comprehensibility is not either-or, but a continuum—and it may even be asymmetrical. Nonetheless, mutual comprehensibility is the most objective basis for saying whether two kinds of speech are languages or dialects.

By the comprehensibility criterion, Cantonese is not a dialect of Chinese. Rather it is a language, as are Shanghaiese, Mandarin and other kinds of Chinese. […] [Source]

Asian Review of Books founder and editor Peter Gordon looks at the politics that surround this linguistic debate in China. From the South China Morning Post:

It’s a subject that gets the letters column in these pages buzzing. Writers have huffed that the use of Putonghua was patriotic and Cantonese nothing but a “vulgar relic”, a “dialect” best left to the “wet market”, and further opined that, “in the realm of education, Cantonese should be treated as a mispronounced, grammatically incorrect form of Chinese rather than a desirable medium of instruction”. Others, notably Sir David Tang, have ridden to the defence of Cantonese as a fully fledged language, and “a very well-developed and rich language at that”, stressing its links to classical poetry.

If Cantonese were “just” a dialect, then its exclusion from education and formal communication might – possibly – be justifiable. If, on the other hand, Cantonese is a “language”, it smacks of politics to favour Putonghua at its expense.

So is Cantonese a language or a dialect of Chinese? The answer may be “yes” to both. Cantonese, most linguists would say, is indisputably a separate language. It is at least as different from Putonghua as any two Romance languages are from each other. It is spoken by roughly as many people as, say, Italian. There is an oft-quoted saying attributed to linguist Max Weinreich that notes that “a language is a dialect with an army and a navy”. In China, this would have been the Beijing dialect.

[…W]hether Cantonese is a language or dialect is, at least for the Cantonese themselves, more a question of identity – and hence politics – than linguistics. The answer may depend not just on what Cantonese-speakers believe but also on the language in which they phrase the distinction. [Source]

The South China Morning Post’s Alex Lo offers a historical argument on how Cantonese is a language of its own:

When it comes to Cantonese, I am a diehard regional southerner and proud of it. By Cantonese, I mean the language spoken in Hong Kong and Guangdong. I say language, not dialect. Yes, there are minor differences in expressions on both sides of the border but it’s nothing like it has with Putonghua.

[…] The usual argument is that a dialect has no written script. Well, our current written Chinese script called “baihua” or vernacular system emerged from the May 4th Movement’s modernisation of the language. The script is neither Putonghua, a northern spoken language, nor Cantonese, a southern one. This written script works equally well for Putonghua, Cantonese or other Chinese speakers. Cantonese has a much longer and venerable lineage than Putonghua, a mix of the Han Chinese, Mongolian and Manchu languages from the Qing dynasty. Cantonese could possibly date back to the Warring States period, though there was then no unified China and the south was considered “barbarian”. But Cantonese emerged as a recognisable language from the time of the An Lushan Revolt during the Tang dynasty, when an exodus of refugees flooded the south.