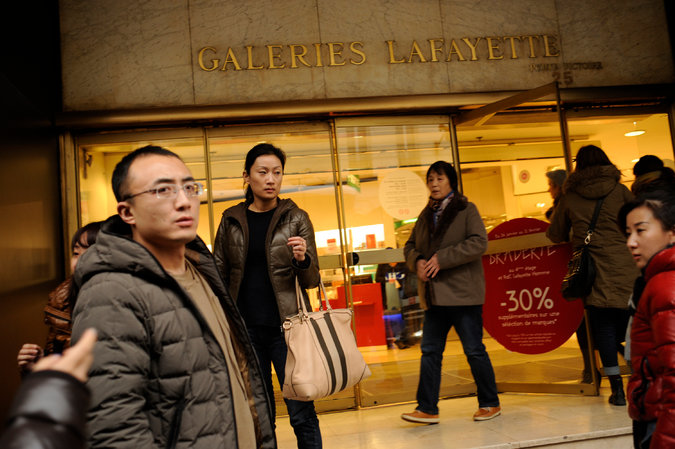 While President Xi Jinping’s austerity measures have been curtailing official extravagance, a growing number of ordinary affluent Chinese is engaging in luxury shopping tours abroad in places like Europe. From the New York Times:

Tourists like Ms. Mao are part of a growing wave of newly affluent Chinese taking advantage of more direct flights to the shopping capitals of Europe. The Lunar New Year holiday is now underway, a time when a big part of the 110 million Chinese expected to travel abroad this year will be packing their bags — and their wallets — for luxury expeditions.

And purveyors of European luxury brands, anticipating the arrival of this important clientele, stand ready to embrace it, whether by offering guided tours, in Mandarin, of flagship showrooms; providing backstage access to couture runway shows; or engaging in a variety of other flourishes tailored for the Chinese tourist-shopper. American companies have been slower to attract the Chinese shopper, but some retailers, like Tiffany, have Mandarin-speaking staff or hold special events.

Storied European brands like Burberry, Hermès and Dior can be bought in high-end shops and shopping malls of major Chinese cities, of course. But for reasons including higher taxes in China and lower prices in Europe, Chinese consumers, who buy more luxury products than shoppers of any other nationality, prefer to do their buying abroad. Of the more than $80 billion in Chinese purchases of personal luxury goods last year, two-thirds were made outside China.

Flagging demand in China itself was a factor cited last week by the Paris-based LVMH Moët Hennessy Louis Vuitton, the world’s largest luxury goods group, for the company’s flat profit last year. That is all the more reason the company and many of its peers are starting to plow more money into European showcases and shift investments away from the Chinese mainland. [Source]

The China-born, New York-based designer recently announced a partnership with WeChat, which will allow fans to add the designer as a contact in order to participate in real-time group chat during the show and receive photos and voice messages from Tam as it takes place. In addition, Tam has designed four sets of chat wallpapers for fans to download, and will be gifting guests with a limited-edition iPhone 5/5S case at her Februrary 9 show. WeChat fans are also eligible to enter a contest to win front-row seating, backstage access, and a chance to model in the show itself.

“We are always looking for innovative ways to grow with technology and WeChat lets me bring the fashion week experience from a designer’s lens to a wider audience,” said Tam. [Source]