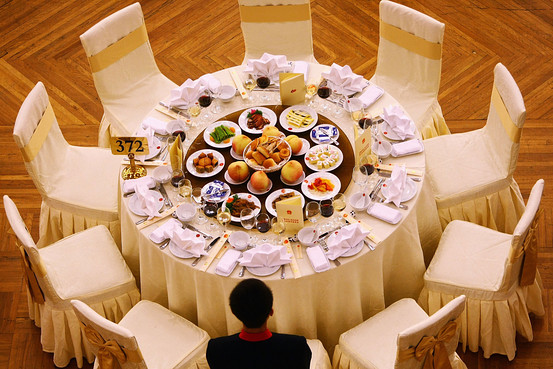 According to the PEW Research Center, official corruption is considered a “very big problem” by more than half of the Chinese public. Since becoming China’s president and the CCP’s general secretary, Xi Jinping has initiated a massive crackdown on corruption that has so far doled punishment to nearly 20,000 officials and implicated even those from the highest ranks of Party power. Along with this drive to root out graft, Xi has launched austerity measures aimed to quell outrage at what is known as the “three public expenditures” (三公经费)—public funds used to finance officials’ lavish banquets, vehicles, and overseas trips. Xinhua reports on a new set of  rules issued to civil, Party, and SOE officials:

Chinese central authorities on Sunday issued more detailed and easier-to-enforce rules on official receptions, showing the resolve of containing extravagance within a “cage of regulations” and rooting out corruption.

The 26-item directive details regulations on the use of public funds for receptions held by local authorities when hosting visiting Party or government officials. It explicitly lists 38 banned practices for receptions to promote frugality and curb waste.

It also orders officials below the provincial level to avoid staying in hotel suites on business trips. [Source]

Another report from Xinhua focuses in on the new regulation’s ban on rare wild animal products:

The document, jointly issued by the general offices of the Communist Party of China (CPC) Central Committee and the State Council, detailed regulations of the use of public funding on receptions by local authorities to receive visiting Party or governmental officials.

Officials on business tours should arrange their own meals according to relevant expenditure standards and the local hosts are allowed to provide only one reception dinner if needed, the regulation said. [Source]

According to yet another report from Xinhua, some local Party officials are welcoming the new regulatory development as an escape from the hardships of overindulgence:

China’s new rules on official receptions have been welcomed by grassroots cadres at a time of the year that in the past involved overindulgent banquets and glutted stomachs.

“In previous years, with floods of guests to entertain, I used to sleep at scenic spots night after night during the peak seasons,” said a head of a local reception office in Damao County in Inner Mongolia Autonomous Region.

“My glutted stomach finally gets a rest as receptions, especially ones involving accommodation, are few and far between because of the frugality campaign,” the official surnamed Guo said. [Source]

As a local official in Damao enjoys respite from gluttony, environmentalists are rejoicing over the bans on wild animal products. From the South China Morning Post:

“I think it is great. I think it is extremely important for a whole bunch of reasons,” said Matthew Durnin, a former director of science at the Nature Conservancy, who has spent 20 years in China working on projects concerning endangered species.

“With sharks particularly, they are an apex predator, they are very important. Lots of systems and animals are getting destroyed in the oceans.

“Something that is at this higher level in China really sets a precedent that needs to be set,” he said in Beijing.

Shark fin soup has long been a luxury enjoyed by China’s wealthy, but environmentalists say shark populations around the world have been decimated by its consumption. [Source]

The Wall Street Journal looks at social media commentary on the new rules:

On China’s Sina Weibo microblogging platform, the country’s nearest equivalent to a national forum, one blogger – who appeared to be a civil servant – complained that these new requirements were just plain un-Chinese. “How can you treat officials of a higher position than yourself to a mediocre restaurant?” one blogger wrote. “If high officials agree to dinner, it is too embarrassing to treat them to somewhere poor. Chinese people just love ‘face.’”

[…] The fresh proposals haven’t scored high in public approval, at least judging by a stream of skepticism on China’s microblogs. For some, there was recognition that the latest edict wasn’t exactly new. “What we need is not regulation, but the courage to enforce regulation,” said one user.

“The regulations are (like) a kind father educating his good-for-nothing sons,” said one user. “But will his sons listen? This is a warning to officials and is more progressive than practical.” [Source]

As has been noted during previous austerity and anti-corruption campaigns, rules on official consumption can hurt the revenues of luxury firms. The South China Morning Post reports that some alcohol producers—both Chinese and foreign—are seeing this frugality drive impact their bottom lines:

Spirits, and prices of spirits, are low for many local and foreign alcoholic beverage companies with operations on the mainland after a challenging year marked by depressed demand as a result of restrictions on lavish spending at official banquets.

Expensive wine and spirit brands such as Moutai, once a darling of the wealthy Chinese, have fallen out of favour. The Chinese Luxury Consumer Survey this year of individuals with personal wealth of more than 10 million yuan, found that high-end baijiu brand Moutai had dropped out of the Top 10 preferred gift items by male millionaires. [Source]

Th Global Times reports that the ongoing frugality campaign, along with concerns over an exceptionally smoggy early winter season in China, have led to a slump in fireworks sales:

However, an ongoing frugality campaign by the Chinese government and the lingering smog that has hit most parts of eastern and northern China this month have dealt him a heavy blow.

He is board chairman of Hunan Dream Fireworks Co., Ltd., which has participated in many domestic art and music festivals in the past. So far this year, He has not received a single government call for bidding on fireworks shows.

A circular released in late November by the Communist Party of China Central Commission for Discipline Inspection, the country’s top discipline watchdog, urged officials not to buy fireworks and firecrackers with public funds during holidays. [Source]

The Global Times also reports that the Central Commission for Discipline Inspection—China’s anti-graft watchdog—is planning to standardize the benefits enjoyed by officials based on their bureaucratic position:

China’s anti-corruption watchdog is planning to draft the standards governing officials’ benefits and welfare, defining varying packages based on the level of the official.

The standards, which cover offices, houses, cars, receptions, vacations, secretaries and security guards, aim to ensure that officials are enjoying welfare that “matches” their level, the Communist Party of China (CPC) Central Commission for Discipline Inspection said in an article on Wednesday.

The comments made by the commission followed the road map for reform decisions of the Third Plenary Session of the 18th CPC Central Committee, which requested better regulation for the officials’ benefits to avoid extravagance and corruption.

Only a limited number of personnel at certain levels are allowed special official cars, full-time secretaries and bodyguards, according to a statement on the commission’s website. [Source]