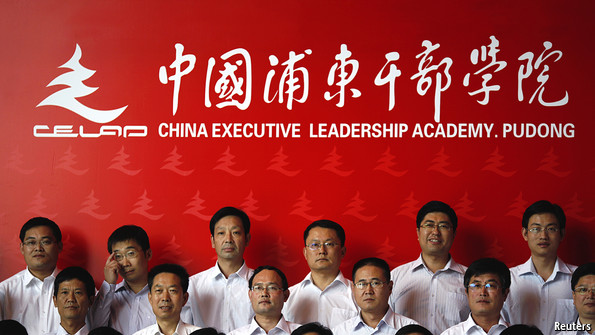 The Economist checks in from the China Executive Leadership Academy Pudong, where Communist Party members receive training on how to handle an increasingly aggressive news media:

The party still exerts firm control when it comes to anything sensitive. But outside politics the media landscape has changed completely. Consumer programmes, investigative reporters and a noisy mix of microbloggers and middle-class NIMBYs are holding the party more to account. The classes at CELAP demonstrate that the leadership has understood what is at stake, even if it is still learning how to deal with it. Some of the party’s biggest recent problems have come from mishandling the newly probing media.

The message of the classes is clear: officials must be more responsive to the press and the public even as they toe the party line. Environmental protests, angry villagers talking to global media and spokesmen stumbling in news conferences have become teaching opportunities.

“In the past we could avoid the press…we could remain silent, but now we can no longer avoid it,” Tan Wenzhu, a lecturer, told a group of 40 officials from Heilongjiang province. Mr Tan showed the class a photograph and a mocking cartoon of an official who attended the scene of a grisly road accident in 2012 and was photographed smiling and sporting a luxury watch. He became known as “Brother Watch”, the punchline of online jokes and a liability to the party. He was soon out of a job. “I hope none of you will bring shame on the party and the government with your own problems,” intoned Mr Tan. [Source]

This month’s Nieman Reports, from Harvard University’s Nieman Foundation for Journalism, examines “The State of Journalism in China” – with government officials under increased scrutiny by the news media, demand has grown to understand the true costs and political implications of China’s rise. From The New Yorker’s Evan Osnos, a contributor to this issue:

For journalists, China’s rise presents a set of puzzles that we cannot escape. The first is practical: As journalists in China, foreign or domestic, how do we navigate the obstructions erected by the Communist Party, and then limit the consequences to those who dare to speak? This is the most obvious challenge, but also, perhaps, the most familiar, and the tools we use are those which serve correspondents in any country: persistence and ingenuity, sure, but, more important, the journalist’s version of the Hippocratic Oath—the determination to do no harm to sources in a nation that regards their voices as a threat.

The more novel problem is one of proportions: In a nation of such profound contrasts—between new freedoms and old forms of repression, between extraordinary fortunes and persistent poverty—how many words should we dedicate to the fact that China has never been more prosperous—and how many words should we spend on the fact that it is the only country in the world with a Nobel Peace Prize winner in prison? (That’s Liu Xiaobo.)

Lastly, and perhaps most difficult, the puzzle of covering China is one of access: What is a reporter and a news organization to do in a country that is increasingly denying access to journalists who publish work that the government finds threatening? Over the past two or three years, the Chinese government’s view of the foreign press has changed in two important ways: In 2011, the Arab Spring unnerved the Chinese leadership more than any event in a generation with the demonstration of how information and organization could undermine authoritarian governments that appeared to be stable. At the time, Chinese authorities publicly criticized foreign correspondents, whom they blamed for covering Chinese activists who were inspired by events in the Middle East. [Source]