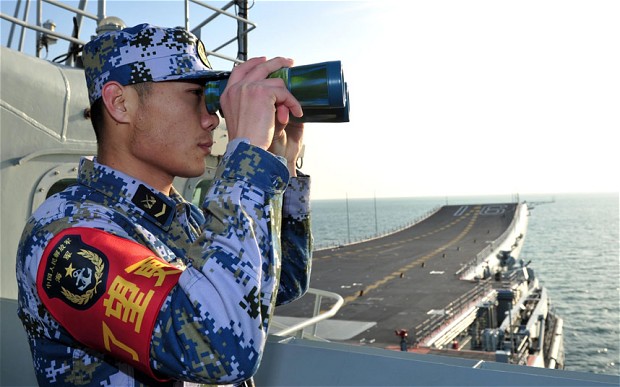 Director of US naval intelligence James Fannell remarked at a public forum that China has been training its forces to carry out a “short, sharp” war with Japan over the Diaoyu (Senkaku) islands in the East China Sea. The Telegraph reports:

Addressing a conference sponsored by the US Naval Institute in San Diego, California, Captain James Fannell said the recent Missing Action 2013 exercises were training for the invasion of the uninhabited archipelago, which China claims as its sovereign territory and refers to as the Diaoyutai Islands.

“We concluded that the [People’s Liberation Army] has been given the new task to be able to conduct a short, sharp war to destroy Japanese forces in the East China Sea, following with what can only be expected as the seizure of the Senkakus or even a southern Ryukyu island,” said Capt. Fannell, director of intelligence for the US Pacific Fleet.

[…] “As a senior US government official recently stated, there is growing concern that China’s pattern of behaviour in the South China Sea reflects an incremental effort by China to assert control of the area contained in the so-called ‘nine-dash line,’ despite the objections of its neighbors and despite the lack of any explanation or apparent basis under international law,” Capt. Fannell said.

“By the way, ‘protection of maritime rights’ is a Chinese euphemism for coerced seizure of coastal rights of China’s neighbours,” he added. [Source]

The Pentagon maintained that James Fanell’s comments do not represent the views of the US Defense Department. Phil Stewart at Reuters reports:

The Pentagon’s top spokesman, Rear Admiral John Kirby, declined to comment on whether it was appropriate for Fanell to publicly offer such a blunt assessment, but said the Pentagon wanted closer ties with China’s military.

“Those were his views to express,” Kirby told a Pentagon news conference.

“What I can tell you about what Secretary Hagel believes is that we all continue to believe that the peaceful, prosperous rise of China is a good thing for the region, for the world,” he said, referring to Defense Secretary Chuck Hagel.

Asked whether the Pentagon shared Fanell’s assessments, Kirby said it would be inappropriate for him to speak to the intentions or motivations of another country’s military. [Source]

At FT, Geoff Dyer writes that China’s military buildup in the East China Sea is intended to weaken the US naval presence in the western Pacific and to “reshape the balance of power in Asia.”

China’s new navy is both an expression of power and a means to a diplomatic end. By weakening the US naval presence in the western Pacific, China hopes gradually to undermine America’s alliances with other Asian countries, notably South Korea, the Philippines and maybe even Japan. If US influence declines, China would be in a position to assume quietly a leadership position in Asia, giving it much greater sway over the rules and practices in the global economy. Through its navy, China hopes to reshape the balance of power in Asia. The naval competition in the western Pacific will set the tone for a large part of global politics in the coming decades. [Source]

Bloomberg Businessweek writes that the US needs to take a stronger stance against Japan’s provocations in the region, which include Abe’s recent visit to the Yasukuni Shrine and efforts to downplay Japan’s wartime atrocities in school textbooks.

Japan had been clamoring for the U.S. to speak out more forcefully after China imposed an “air-defense identification zone” over a set of islands claimed by both countries. Officials in Tokyo have warned that any hint of daylight between Americans and Japanese only encourages further bullying from the mainland. For that same reason, U.S. officials have tempered their criticism of statements and actions by Japanese leaders that irk China, not to mention other victims of Japanese aggression during World War II.

[…] The U.S. should push back, and less gently than usual. President Obama’s trip to Asia in April is an opportunity for the White House not only to reaffirm its disapproval of Chinese adventurism, but also to make clear that Abe’s provocations are threatening stability in the region and damaging the U.S.-Japan alliance. Voters threw out Abe once before when he let nationalist obsessions distract him from minding the economy. Sustained domestic pressure is needed to rein him in again. [Source]

US Secretary of State John Kerry announced earlier this month that the US is committed to defending Japan against China’s territorial claims in the Asia-Pacific region.