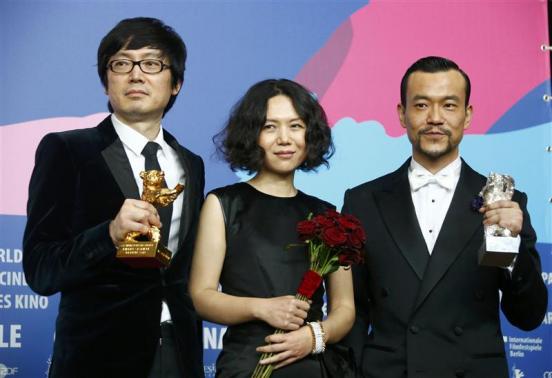 Liao Fan, who said he put on 20 kg (44 lb) and drank more alcohol to play the role of detective Zhang Zili, was named Best Actor.

“It seems every time we take them abroad, there is a greater enthusiasm for Chinese cinema. We hadn’t expected that, but film is global nowadays.”

He noted that Berlin had given the Golden Bear to the Chinese film “Red Sorghum” in 1988, and said “Black Coal, Thin Ice” was “film noir” in the style of Quentin Tarantino and other Hollywood directors, and not in the mould of traditional Chinese kung fu films or period dramas. [Source]

The festival’s website gives a synopsis of Black Coal, Thin Ice‘s plot, which revolves around an overweight detective and a series of murders in a remote mining region in northern China.

“I have said much earlier that for international filmmakers, 2013 is the year of China, and the following ten years will be also the China Decade,” Zhou Tiedong, president of China Film Promotion International, wrote on his Sina Weibo microblog.

[…] Cinematographer Zeng Jian won the Silver Bear for Outstanding Artistic Contribution for Lou Ye’s Blind Massage, in which some of the cast are visually impaired. Lou is a former problem child for the film authorities, and was banned for five years for Summer Palace. [Source]

“After a very long wait, Chinese films have finally burst forth magnificently again in the world’s film festivals, with fireworks,” the state news agency Xinhua wrote. The proud statement was a play on the Chinese title for “Black Coal, Thin Ice,” the gritty detective movie by Diao Yinan that took the top award at the just-concluded 64th Berlin International Film Festival: “Fireworks in Daylight.”

The Xinhua verdict reflected a widespread desire in China for global recognition of the country’s artistic achievements, and in private and public the successes are being celebrated. But the edgy Chinese films that swept the Berlinale, winning several major awards and widespread critical acclaim, challenge censorship at home and highlight a dilemma: What succeeds internationally is often controversial back in China, where the censor’s cuts are deep and delays long and cinematic fare is heavy on formulaic historical dramas with much fighting and hints of bodice-ripping.

So amid the joy, some commentators advised caution. “This shouldn’t be read by the outside world as a success for Chinese films, producing a rounded sense of collective excitement and self-satisfaction that then passes. Everyone knows what Chinese films are really like,” wrote one commentator, Grandpa Film Critic Anye Jishi, on Sina Weibo, China’s version of Twitter. [Source]