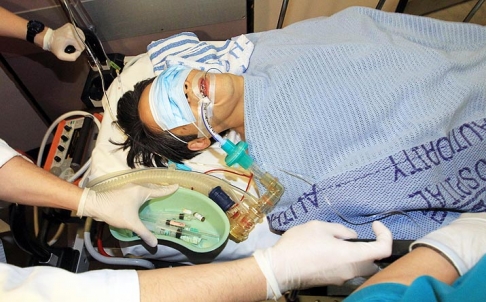 In what police sources have referred to as a “classic triad hit… designed to send a warning,”  Kevin Lau, former editor of trusted Hong Kong newspaper Ming Pao, was attacked by knife-wielding motorcycle hitmen. This attack comes days after thousands of Hong Kong residents gathered to protest against eroding press freedom in the semi-autonomous territory. Mr. Lau is now in critical condition at a hospital in Hong Kong’s Chai Wan district. From the South China Morning Post:

Motorcycle hitmen who carried out a “savage” knife attack that left one of Hong Kong’s most influential journalists fighting for his life were still at large last night as the city reacted with shock, revulsion and anger.

Kevin Lau Chun-to was ambushed as he got out of his car near a restaurant he frequents for breakfast shortly after 10.30am.

[…] The injury was so deep it exposed his chest cavity and vital organs. He also suffered another cut to his back and two more on each leg, which doctors say could threaten his ability to walk.

[…] Speculation has grown that the attack was connected to Lau’s journalistic work, including Ming Pao’s recent articles about the business affairs of senior mainland figures. [Source]

The removal of Kevin Lau from his post as chief editor of Ming Pao in January added to concerns about press freedom in Hong Kong, and many Ming Pao staff members gathered in protest. While Lau was serving as chief editor, Ming Pao was a reporting partner in the International Consortium of Investigative Journalists project that revealed the offshore holdings of many Chinese elites.

The attack has been condemned by The Hong Kong Foreign Correspondents’ Club, the ICIJ, and Hong Kong’s Chief Executive CY Leung. From a HK government press release:

“The Government and I are extremely concerned and outraged about the attack on Mr Lau this morning and we strongly condemn this savage act. Hong Kong is a lawful society and we will not tolerate violence. The Police will conduct a full investigation into the case. I appeal to those who could offer information on the case to contact the Police as soon as possible to bring the offender to justice.” [Source]

Chief Executive Leung reportedly visited Mr. Lau in the hospital. The Hong Kong Journalists Association reported last summer that press freedom in the SAR had reached a new low since Leung’s appointment in 2012.

The New York Times notes that the attack of Kevin Lau is the most extreme of several recent attacks on Hong Kong journalists, and that it comes amid mounting tension between Hong Kong and the Mainland:

The attack on Mr. Lau comes as Hong Kong-mainland Chinese tensions have been building amid increasing fears over the mainland’s widening political and cultural influence over the former British colony.

Starting in June, a series of large demonstrations are planned in Hong Kong, including one to mark the 25th anniversary of the crackdown on the Tiananmen protests in Beijing and others to press demands for universal suffrage in electing the territory’s leaders. Such organized protests are banned in mainland China. [Source]

Update at 21:15 PST The South China Morning Post article opening this blogpost has been updated to include video footage from the investigation and hospital, including Chief Executive Leung addressing the press. The update also relays a police appeal for those with information to call  9255 4063.