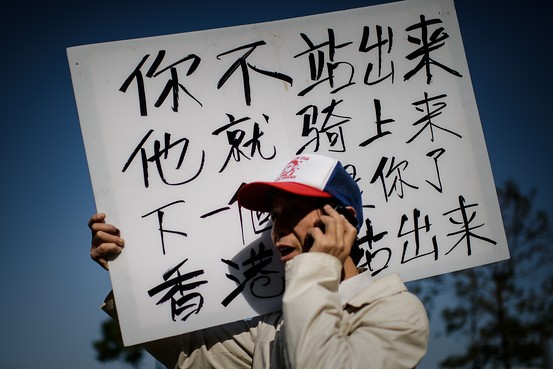 After free information advocacy groups reported on eroding press freedom in Hong Kong and Taiwan as Beijing leverages its economic clout for media influence, thousands rallied in the streets of Hong Kong last weekend. From The Wall Street Journal:

Thousands of residents in Hong Kong rallied Sunday to protest what they see as waning press freedoms in this Chinese city.

According to organizers, more than 6,000 demonstrators—including reporters, college students and retirees—rallied under blue skies by the edge of Victoria Harbour. Police put the number at closer to 2,200 at its height. Crowd estimates from police and organizers usually vary widely in Hong Kong.

[…] Karen Kwok, a cable-television reporter at the rally who attended alongside at least 10 colleagues, said the future of freedoms “depends on what kind of fight we put up.”

“If we don’t speak up, of course it will only get worse,” she said, as she stood before a wall of blue ribbons that protesters had tied to the fence surrounding the government’s office.

A government spokesman said the city was committed to continuing to guard freedom of speech and freedom of the press, as the two are “major elements in sustaining Hong Kong’s status as an international metropolis.” [Source]

The rallies come a week after thousands of runners in Hong Kong’s Standard Chartered Marathon wore blue ribbons in support of  press freedom.