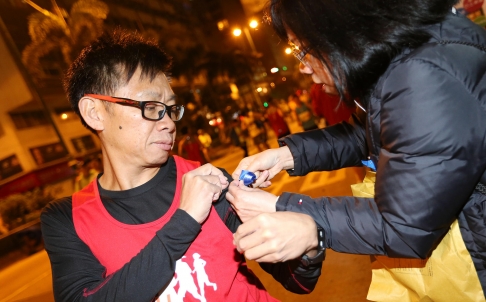 At least 6,600 silk bands were handed out, the Hong Kong Journalists Association said, in the first stage of its “Gag Us Not” campaign. The ribbons went in 2½ hours, association chairman Sham Yee-lan said, adding that the campaign was the “first punch” in a fight against “suppression of dissenting voices”.

[…] The campaign was launched after a week that saw Commercial Radio host Li Wei-ling, a vocal critic of Chief Executive Leung Chun-ying, sacked. Her abrupt dismissal came on the day the city slid from 58th last year to 61st out of 180 countries and territories in a Reporters Without Borders media-freedom index – a fall the association called “worrying”.

The association said in a statement: “We’ll show the authoritarians that we will blow up when asked to remain silent.”

Many of the 65,000 runners yesterday expressed support for the cause. [Source]