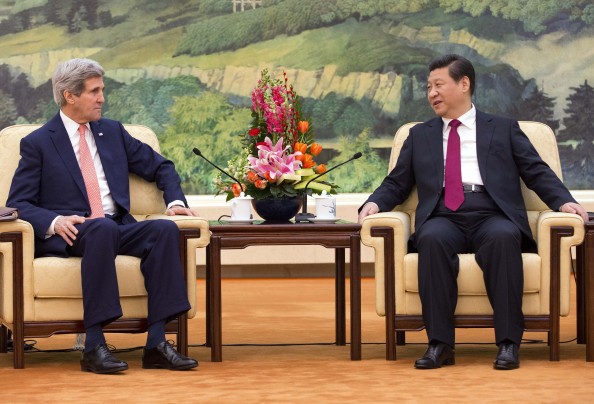 On Saturday, Secretary of State John Kerry completed a two-day visit to China, where North Korea was at the top of the agenda in his talks with Chinese leaders. From the Washington Post:

On a tour though Asia, Kerry said he held a constructive meeting Friday with Chinese President Xi Jinping in Beijing’s Great Hall of the People. He said he urged China to “use every tool at its disposal” to persuade North Korea to give up its nuclear weapons program.

But Washington-based China experts said Beijing was unlikely to push its longtime ally too far over the issue and remained unwilling to join a U.S.-led attempt to isolate the Pyongyang regime.

Kerry was also using his trip to try to calm regional tensions. He signaled U.S. unhappiness with a series of assertive steps taken by Beijing in territorial disputes with its smaller neighbors, but he called on all sides to show restraint.

At the same time, he discussed a range of issues with his Chinese hosts, he said, including climate change, human rights, Syria and Iran. [Source]

Kerry told reporters that China “could not have more forcefully reiterated its commitment” to helping denuclearize the Korean peninsula, Reuters reports:

“I encouraged the Chinese to use every tool at their disposal, all of the means of persuasion that they have, building on the depths of their long and historic and cultural and common history (with North Korea),” he said.

“They made it very clear that if the North doesn’t comply and come to the table and be serious about talks and stop its program … they are prepared to take additional steps in order to make sure their policy is implemented,” Kerry said, adding the United States and China were now discussing “the specifics of how you do that”.

Chinese Foreign Minister Wang Yi told Kerry China would work with all parties concerned, including the United States, to play a constructive role for the region’s peace and stability. [Source]

To discuss climate change, Kerry visited a automobile manufacturing plant in Beijing to emphasize progress made between the two countries in environmental cooperation. The Guardian reports:

In a press conference at a Beijing car-making factory, the Cummins-Foton Joint-Venture Plant, which he visited as part of an Asia tour, Kerry said he and local representatives had “succeeded in completing our agreement with respect to some steps we are going to take to move the climate change process forward”.

Kerry is scheduled to continue his tour, which started with talks in Seoul at which he heralded China’s stance on North Korea’s nuclear arsenal, with visits to Indonesia and Abu Dhabi.

On Saturday, he continued: “One of the most important challenges that we all face here in China, in America, in Europe and other countries … is how do we improve the quality of the air that we breathe and at the same time reduce the greenhouse gas emissions which contribute to climate change? To be successful, it is going to take the cooperation of China and the United States – not just our governments, but also our industries.” [Source]

Read Kerry’s full remarks and the text of the China-U.S. Joint Statement on Climate Change.

Kerry also met with four Chinese bloggers and journalists, who discussed a range of issues with him and asked him for U.S. help in combatting Internet censorship in China. From the New York Times:

Mr. Zhang [Jialong, a reporter for Tencent Finance], who was detained for three days in 2011 because of his posts about conflicts between the artist Ai Weiwei and the Chinese authorities, asked Mr. Kerry to look into reports that American companies had helped the Chinese government establish controls over what websites Chinese citizens could access.

Wang Keqin, an investigative reporter who American officials said had been forced to leave an economic publication because of his critical reporting, said the cause of Internet freedom was “going backward.”

Ma Xiaolin, a former correspondent with the official news agency Xinhua who is a co-founder of a blogging site, said websites had become the main sources of news and expressed hope that the Chinese government would ease its Internet controls if relations with the United States improved.

If China becomes a real partner of America, he said, “the Chinese government can feel more confident.” [Source]

In a press conference after his meetings, Kerry again discussed Internet censorship, the Global Post reports:

Kerry told reporters Friday that in his discussions with the Chinese leadership he had a “frank discussion about some human rights challenges… and the free flow of information in a robust, civil society” which included some of “the challenges of the cyber world that we live in today.”

“I emphasised that respect for human rights and for the exchange of information in a free manner contributes to the strength of a society in a country,” he told reporters after his meetings in Beijing. [Source]