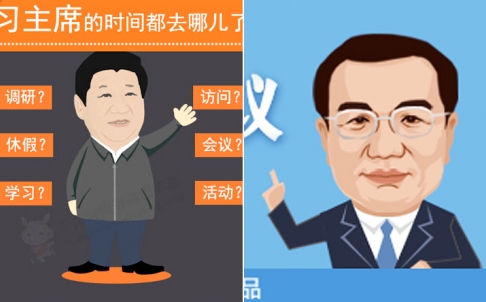 The infographic, produced jointly by the central government website and Xinhua News Agency, depicted the routine work meeting of the State Council held on Wednesday that was presided over by Li. He wears a pair of glasses, a deep blue suit and light blue tie in the cartoon.

[…] Zhu Lijia, director of Public Administration Studies at the Chinese Academy of Governance, said such cartoon images demystify the leadership.[Source]

According to an interview published by The Beijing News, the cartoon’s producer Yang Mingxing told that her team was inspired to make the cartoon by comments Xi made at the Winter Olympic Games in Sochi. He told Russian media that he devoted most of his time to work, and quoted a song, “Where Has Time Gone?,” which was performed at the Chinese New Year gala. [Source]

It is usually taboo for official media to represent Chinese leaders in cartoons, as propaganda officials are concerned they may dilute the leaders’ authoritative image.

However, recent moves by state-owned media outlets show a seeming change of heart among propaganda officials, who are using new approaches to adapt to the changing media landscape and engage the younger generation.

Last year, a Beijing-based animation studio’s clip,featuring smiling, animated versions of China’s leaders (including Xi) and explaining sociopolitical issues in China, became a big hit on Chinese social media. It signalled in part that, far from viewing their leaders as weak after watching the cartoon, citizens tended to view their leaders as more accessible. [Source]