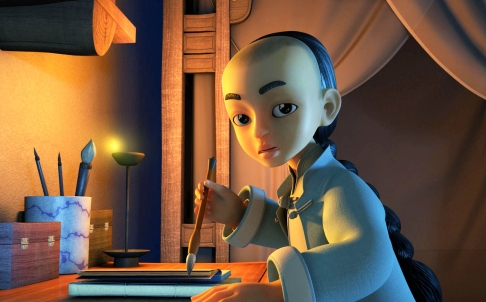 While tightening regulations on cartoons like Pleasant Goat and Big Big Wolf that may set a bad example to small children, Chinese authorities are seizing on animation to convey politically harmonious messages. As the 120th anniversary of his birth approaches, an animated film backed by the Party’s Qiushi political journal aims to “desanctify” Mao Zedong by portraying his mischievous childhood in Hunan. From Keira Lu Huang at South China Morning Post:

To ensure the portrayal was realistic, the production team sent 600 volunteers to Mao’s hometown in Shaoshan in Hunan province and other places to gather anecdotes about him. One of the biggest challenges they faced was how to balance the exaggerated expressions that cartoons use with the solemnity required when dealing with the founder of modern China, according to Lei’s husband, Zeng Xiangbao, who is the film’s general producer.

While they hoped to offer a new view of Mao, his mother Wen Qimei was treated with such reverence they considered using the term “Virgin Mary” in the English subtitles to describe her. “Mao’s mother had great influence on him and she was a Buddhist,” Lei said.

[…] President Xi Jinping’s “Chinese dream”, although not mentioned explicitly, was one of the film’s themes, she said. The campaign, which has been a personal project of Xi, seeks to promote the revitalisation of the nation. It would sit alongside the expression in the film of Mao’s childhood dream for the nation, and his ambition to leave Shaoshan in pursuit of it. [Source]

Xi’s own rise to leadership is the focus of a short web cartoon of murky but, according to Austin Ramzy at The New York Times’ Sinosphere blog, likely official origins. The video emphasizes the role of campaign funding in becoming U.S. president and glances at the British leadership selection process, comparing both to reality TV shows. It then turns to China:

In the new cartoon on leadership selection, called “How to Become a President,” Mr. Xi jumps up the ranks of Chinese officialdom not unlike the protagonist of the video game Donkey Kong, minus the rolling barrels. The video doesn’t mention the factions of Chinese politics, the significance of Mr. Xi’s “princeling” credentials as the son of an early Communist Party leader or the sometimes contentious intraparty bargaining through which leaders are chosen. The closest it gets is some lines about the “rapids and shoals” any Chinese leader would face in his rise to the top.

[…] The video ends with a subtle dig at critics who say China’s political system needs to democratize. “Many roads lead to national leadership, and every country has one for itself,” the narrator says. “Whether by a single ballot that gets the whole nation out to vote or by meritocratic screening that requires years of hard work like the making of a Kung Fu master, as long as people are satisfied and the country develops and progresses as a result, it’s working.”

See more views on meritocracy in Chinese officialdom via CDT.