Past Leaders’ Birthday Celebrations Under Scrutiny 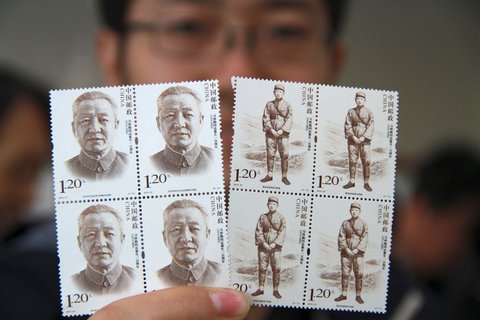 Ancestor veneration in China is back. The Communist Party has devoted official meetings, books, a six-episode television documentary, a garish children’s performance and postage stamps to mark a century since the birth of Xi Zhongxun, a veteran revolutionary who served under Mao Zedong and then Deng Xiaoping.

It happens that Mr. Xi, born on Oct. 15, 1913, was the father of Xi Jinping, the present party leader. And the image of the elder Mr. Xi, who died in 2002, projected in the official pomp mirrors the sometimes contradictory positions that his son has taken since assuming the top party job in November: faithful acolyte of Mao’s revolution; bold pro-market reformer impatient for change; and a strict, penny-pinching official who feared that his children could be dragged into corruption.

“There are many precious and sterling qualities that I hope to inherit and absorb from you, father,” the younger Mr. Xi wrote to his ailing father in 2001, according to the second volume of Xi Zhongxun’s official biography, which was released recently to mark his centenary. “You once instructed me that throughout your life you had never attacked anyone and stuck to the truth, never telling lies.” [Source]

The proceedings have been closely watched for clues about the state of play among the Party elite. Former premier Wen Jiabao resurfaced to mark the anniversary while, according to Russell Leigh Moses, reinforcing past warnings against Mao-era leftism and distancing himself from former president Hu Jintao. From Xi the Younger’s perspective, some observers suggested, the commemorations offered a chance to cement his own position. From Zhuang Pinghui at South China Morning Post:

“The commemorative activities have gone beyond what someone of his rank would normally deserve – after all, his highest rank was vice-premier. That shows the urgent need for the junior Xi to consolidate power by playing the card of his father,” said Zhang Lifan , a political commentator in Beijing.

“Xi is trying to get more political support by reminding people of his father’s legacy and the scale of such commemorative events shows he has not attained the real authority within the party and there is an urgent need to consolidate his power.” Another Beijing-based commentator, Chen Ziming , said Xi was trying to save his plummeting popularity among intellectuals because of the suppression of civic activists by associating himself with his reformer father.

“Xi Zhongxun was one of the rare reformers and president Xi’s commemoration of his father’s legacy is damage control. But a one-time show will not work,” Chen said. “So far we haven’t seen him learning much from his father.” [Source]

Others, though, argue that Xi Jinping showed relatively little inclination to exploit the occasion. From Barbara Demick at The Los Angeles Times, reporting how the government Xi Zhongxun’s Shaanxi hometown of Fuping is hoping to turn the anniversary into a fountain of “red tourist” yuan:

The local government is now raising money for what it says will be a $3-billion theme park spread over 2,700 acres. The park is to include entertainment, cultural and exhibition centers and a spa, according to a notice published in April by the municipal government.

[…] One person who hasn’t visited much is Xi Jinping. Aside from the ceremony Tuesday, the president has distanced himself from the tributes. Political analysts say Xi is keen to avoid the perception that he is a “princeling,” a derogatory expression for the privileged second-generation communists who are among China’s elite.

[…] Li [Datong], the retired editor [of Communist Youth Daily], believes that Xi Jinping is not personally responsible for the initiatives.

“It is a huge taboo for Chinese leaders to expand family tombs or renovate childhood homes,” said Li. “I think this is all local officials trying to ingratiate themselves. That’s how China works.” [Source]

Xi may have more immediate reason to avoid associating himself with the more lavish tributes. A $3 billion theme park would not only run counter to the thrift for which his father was known, but also clash with government campaigns and fierce public sentiment against official extravagance. Recent weeks have already seen controversy over the construction of an $11 million brass puffer fish, and the firing of individual officials for throwing a lavish wedding and accepting a piggyback ride from a villager to save luxury shoes from floodwater. (Recovering orders for high-end Moutai liquor, on the other hand, may suggest that this tide is turning back.) Another focal point of controversy was the announcement of $300 million celebrations to mark the impending 120th anniversary of Mao Zedong’s birth. These are part of an even bigger package of commemorative investments in local tourism, transport and other infrastructure totaling some $2.5 billion dollars [zh], as Xiangtan authorities vie with Fuping’s to squeeze golden eggs from their dead red goose. From Li Hui and Jonathan Standing at Reuters:

Celebrations costing $300 million to mark the birth date of late Chinese leader Mao Zedong, including mass singing and a noodle feast, have sparked popular anger amid a crackdown by authorities on extravagance.

The local government of Mao’s birthplace said on Monday that the events on December 26 marking the 120th anniversary of his birth will include 10,000 people singing a song comparing the revolutionary leader to the rising sun. Another 10,000 will eat “auspicious” birthday noodles at various locations.

“Shaoshan is making the commemoration of comrade Mao Zedong’s birthday the paramount political mandate that overrides everything,” the city government of Xiangtan said on its Internet site. [Source]

Nevertheless, according to a Global Times op-ed on Wednesday, it is the West that harbors an unhealthy Mao fixation.