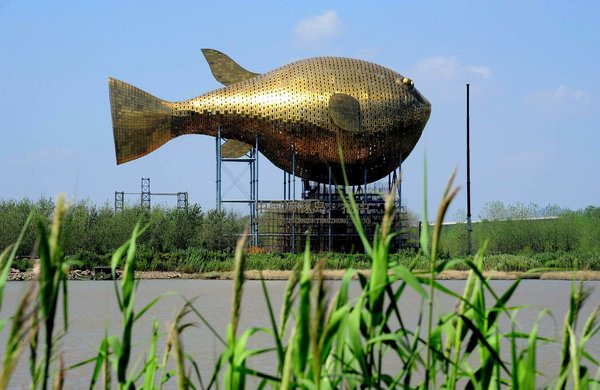 The brass-clad statue, which shimmers golden in the sunlight and switches into a garish light show at night, was built by the city of Yangzhong, in Jiangsu Province in eastern China, to lure visitors to a monthlong gardening expo that opened in September. The “puffer fish tower” has an elevator to take visitors up the equivalent of 15 stories into the sculpture’s belly to view the lush scenery near the Yangtze River.

But news reports and pictures online of the creature, floating on scaffolding with its mouth agape and eyes glowing green, have prompted many Chinese citizens to wonder: Why devote 70 million renminbi, about $11.4 million, of government money for a giant metal fish, especially when the party leader, Xi Jinping, has demanded an end to frivolous spending on officials’ vanity projects? [Source]

Extravagance on the part of individual officials is also under close scrutiny, even in the absence of proven corruption or misappropriation of public funds. One Beijing official was dismissed last week following his son’s $250,000 wedding. From Reuters:

Ma told the Beijing News that the wedding was hosted by both families, and that he “couldn’t stop” the bride’s family from splurging on the venue as well as a troupe of performers that included two celebrities famous for their own lavish wedding.

A branch of the ruling Communist Party’s anti-graft watchdog fired Ma for waste and discipline violations, adding that while it had not found any abuse of public funds, it was investigating, the official Xinhua news agency reported.

[…] “I’m a village official, I know all about the party’s rules and what you should not do, but the bride’s family insisted and I couldn’t stop them,” he told Xinhua. [Source]