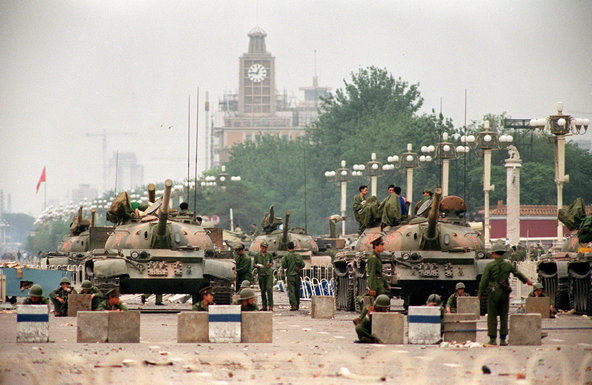 The New York Times’ Chris Buckley talks to historian Steven I. Levine about the Tiananmen Initiative Project, a campaign to mark the looming 25th anniversary of the 1989 June 4th crackdown in Beijing.

[…] I decided I would undertake two things. One would be a massive letter-writing campaign to try to encourage academic institutions and civic institutions, including Confucius Institutes [Chinese government-supported Mandarin Chinese-language teaching institutes, in the United States and many other countries], to hold some sort of meetings — memorial meetings, lectures, teach-ins — so that that the Chinese people who participated in 1989, as well as the Chinese Communist Party leadership, would be informed that the world has not forgotten what happened on June 4. Not only not forgotten June 4, but the whole movement from mid-April until the crackdown. They tried to sweep this under the rug, have false stories about what happened, and shut people up and all the rest of that. The other part then was to use the Internet through a website to have an appeal that people could sign, starting first with academics — but it’s actually open to anybody. We’re also planning to contact all the 50 state legislatures in the United States and ask them to pass resolutions commemorating June 4.

[…] You’ve done this at a time when there’s an undercurrent of discussion about how the Chinese government might be trying to shape not just media coverage, but also academic research about China. Have you found so far that has affected who is signing the petition?

I think many of those who have signed are retired academics, like myself, who no longer have any urgency to go to China, and who are willing to then take what is not a risk at all by signing. I’m frankly disappointed by the relatively small number of people — active China scholars — who are willing to take the risk of signing their names to a petition like this. I think that the more people who sign, the less risk there will be. It was not unexpected, though. [Source]