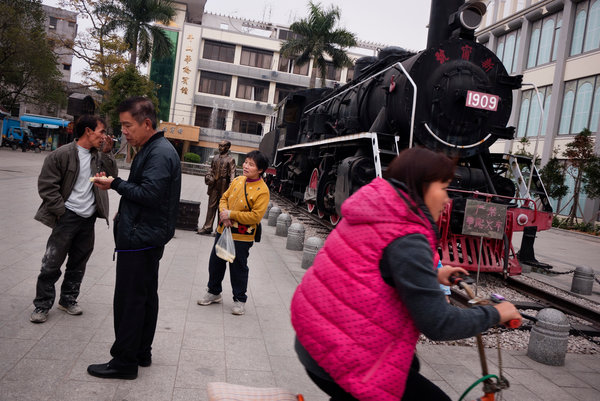 At the New York Times’ Sinosphere blog, China correspondent Edward Wong reflects on his family’s memories of the Xinning Railway, where there is now “nothing much to see, except for weeds and earth and shadows”:

The idea to write an article on the now-vanished Xinning Railway came to me after hearing stories from my father and his older brother, Sam Wong. The railroad cut through the heart of the lush Taishan region of Guangdong, the point of origin for many overseas Chinese. A private railroad, it had been built as a modernizing project for the region by Chen Yixi, a Chinese immigrant to the United States who had lived for years in Seattle and made a fortune as a labor contractor on railway projects in the American West.

[…] Later, after he moved back to the Taishan area, he spent a year of high school in classrooms that were in the railway headquarters. That was from autumn 1943 to June 1944, when the war was still raging. The headquarters was in Taishan City, not far from the village, and next to the West Gate train station. “We used the station concrete platform and nearby grounds for military drills and physical education classes,” my uncle wrote.

By then, Kuomintang officials had ordered the railroad dismantled so the Japanese occupiers would not be able to use it. My uncle recalled that from 1942 to 1945 he walked along the abandoned railroad bed between Taishan City and Songlang many times, usually to return to the home village on weekends. It took him about an hour to walk the three and a half miles, or 5.6 kilometers, through the green countryside. [Source]