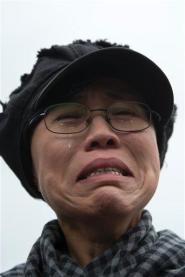 The Associated Press reports that the health of Nobel Peace Prize Winner Liu Xiaobo’s wife, Liu Xia, has deteriorated over the course of her three-year illegal house arrest, and she now “urgently requires medical treatment”:

Her condition took a turn for the worse last month when she suffered what felt like a heart attack and had to be rushed to a hospital’s emergency ward for treatment, said Wu Wei, a close friend of Liu Xia.

Wu, a writer based in the southern city of Guangzhou, said Liu Xia told him in a brief phone call Friday that doctors say she suffers from a serious shortage of blood to the heart muscle. Wu, better known by his pen name Ye Du, also said Liu Xia had a cold and fever.

[…] The couple’s lawyer Mo Shaoping said Liu was admitted on Feb. 8 to a hospital in Beijing to undergo a battery of tests but was unexpectedly asked by the hospital to leave after one night.

Mo said Liu was accompanied by four or five police officers and that the hospital might have been intimidated by the security presence. [Source]