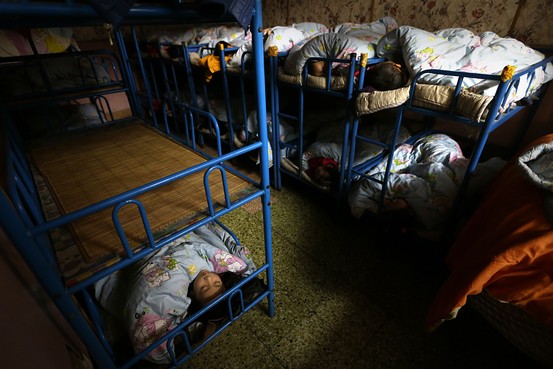 At The Wall Street Journal, historian Maura Cunningham describes the vulnerability of China’s left-behind children, many of whom fall victim to sexual predators:

An estimated 61 million children live apart from their parents in China today, remaining in the countryside with grandparents while their mothers and fathers stream into cities and factories looking for work. Often left to their own devices, they are an easy target for attackers: Various studies indicate that a shockingly high percentage of assault cases involve left-behind girls—in the range of 90% in some areas of Guangdong province. But sexual predation is not the only problem that left-behind children face. Local and foreign news websites are littered with stories of left-behind children being kidnapped by human traffickers (in Chinese), dying in dumpsters and committing suicide.

[…] When the issue of left-behind children comes up, however, the Chinese government cannot claim to be improving their lives. Instead, it is responsible for the biggest obstacle to family reunification—the hukou, or household-registration system, created in the late 1950s to control the flow of people during the Party’s early land-reform movement. Social benefits like subsidized health care and public schooling are linked to the hukou, and an individual can only access full benefits in the jurisdiction where his or her hukou is registered.

Since cities offer significantly better social services than the countryside does, most urban areas prevent an influx of peasant families by barring rural hukou-holders from transferring their registrations into the city. [Source]

Read more about left-behind children in China via CDT.