The Brains of the Party 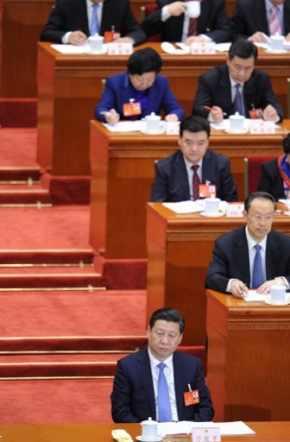 The Economist’s Gady Epstein describes the increasingly diverse organs through which ideas and information reach China’s leaders, from monitors of public opinion—the subject of much discussion last summer—to the hyper-elite Internal Reference of Ideology and Theory journal, whose readership numbers in the low dozens.

As the task of governing China has become more complex, so too has the question of how ideas percolate and filter to the top. Long gone are the days of Mao, when one man disastrously set policy with utter disregard (and sometimes deadly scorn) for the input of his advisors or the welfare of the public. Mr Xi has called for the party to expand its brain capacity to handle such issues, urging the development of “think-tanks with Chinese characteristics”. In recent years hundreds of new institutes and research centres have been established, most of them government-affiliated in some way. Scholars and writers participate in a more open, though not totally free, public marketplace of ideas. Public opinion has more influence than ever on the shaping of policies on such social flash-points as high housing prices, wealth inequality and pollution.

[… But] truly independent think-tanks are not something the Communist Party really wants—they are a feature of civil society as liberal democracies define it, not as the party defines it. The party wants its brains to be internal organs. Those “think-tanks” with the most influence in China do not write for the public but for a much smaller audience. The most powerful research institutions show up on public lists of China’s most influential “think-tanks”, but they do not engage much with the public or with each other, and none are independent. They are trusted instruments of the Communist Party and the state. This makes it inherently difficult for heterodox ideas to waft upwards to the top. [Source]