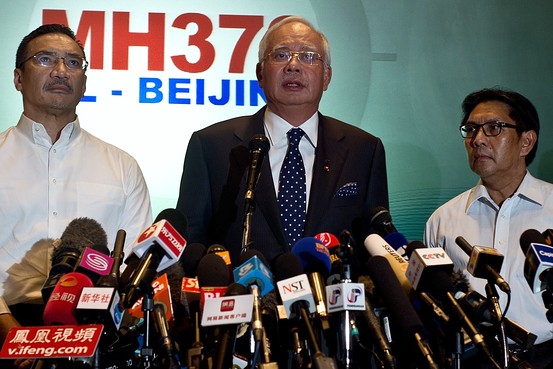 As the families and relatives of Malaysia Airlines flight MH370 continue to wait for news of the missing plane, Chinese authorities have been growing increasingly aggravated with the lack of progress in the search, as they face growing public pressure to ensure the safety and welfare of Chinese nationals. AP reports:

There is “very likely a lot more pressure from the domestic community in China on Beijing to make sure that Chinese nationals are being protected,” said Marc Lanteigne, research director at New Zealand Contemporary China Research Centre at Victoria University of Wellington.

“Given today’s technology, the delay smacks of either dereliction of duty or reluctance to share information in a full and timely manner,” Xinhua said. It said Malaysia “bears inescapable responsibility.”

Xinhua said the plane’s manufacturer, Boeing Co., and the maker of its engines, Britain’s Rolls Royce plc, as well as “intelligence superpower the United States,” with access to valuable information, “should also have done a better job.” [Source]

In Beijing, families of flight MH370 passengers are growing increasingly frustrated at the handling of the investigation by Malaysia Airlines and the Malaysian government. Edward Wong at the New York Times reports:

To say many Chinese are exasperated, astounded or fed up with the way the Malaysian authorities have handled the investigation and search efforts is an understatement. Last week, people at the Lido Hotel lobbed plastic water bottles at Malaysia Airlines executives. Now they are clamoring for the head of anyone who had a hand in what they are calling a tragic farce, from the radar personnel who might have been asleep on the job up to the defense minister, Hishammuddin Hussein, whose announcement on Sunday about the sequence of events in the crucial minutes when contact with the plane was broken were contradicted on Monday by the airline’s chief executive.

[…] The families in the ballroom have endured briefing after briefing from Malaysia Airlines, the Malaysian ambassador and aviation officials, only to come away with more questions each time. On Saturday, they were told that Malaysian officials were conducting a criminal investigation. About 30 people moved chairs into a circle to discuss what that might mean.

A middle-aged man said the families would stick together until there was a definite outcome. “We will march in the streets if we have to,” he said. [Source]

Although various parties have suggested many conflicting theories for the mysterious loss of MH370, no definitive explanation has been confirmed. Chinese authorities are calling on the Malaysian government to “immediately” expand its search efforts for the aircraft. Reuters reports:

Malaysia must “immediately” expand and clarify the scope of the search for a Malaysia Airlines jetliner that disappeared with 239 people on board, the Chinese Foreign Ministry said on Monday in a statement posted on its website.

No trace of the plane has been found more than a week after it vanished but investigators believe it was diverted by someone with deep knowledge of the plane and commercial navigation.

Satellite data suggests the plane could be anywhere in either of two vast arcs: one stretching from northern Thailand to Kazakhstan, or a southern arc from Indonesia into the Indian Ocean west of Australia. [Source]

The Chinese Ambassador to Malaysia announced that no Chinese passengers aboard the flight are suspected of criminal involvement with its disappearance. A directive from China’s Central Propaganda Department a week ago prohibited media sources from independently analyzing or commenting on the lost flight, and instructed them to keep their focus on the national Two Sessions political meetings. Author Murong Xuecun attacked this priority in a New York Times op-ed on Monday.