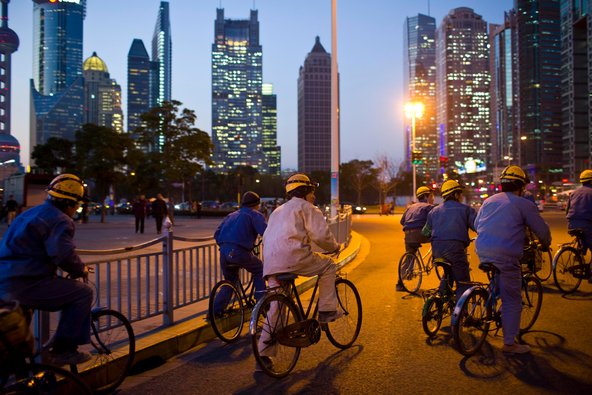 Prime Minister Li Keqiang announced last week at the opening of the annual session of China’s National People’s Congress that the country’s goal for growth was “around’’ 7.5 percent this year, the same as last year but lower than past targets of 8 percent annual growth. But he did not guarantee that number, saying it would take “arduous efforts” to meet it, and blaming China’s past growth-at-any-cost model of “inefficient and blind development” for the country’s heavy air pollution.

[…] “While it’s clear this government wants to deliver meaningful reforms, whether we get a ‘reform dividend’ in 2014 is an open question,’’ Mr. Green said in an email. “In contrast, slowing credit growth is going to drag, and the domestic housing market recovery appears to be easing. So it will be tough to hit 7.5% in reality, I think.’’

Mr. Song’s analysis rings of a mindset that Mr. Li has said he is committed to ending: the push for growth above all else that has helped stoke local debts, wasteful spending and heavy smog. For years, officials at all levels of government followed the mantra “protect the eight” (bao ba), which meant doing what it took to make sure the government met its 8 percent growth target. That was the minimum level seen as necessary to create enough jobs for the tens of millions of people migrating from the countryside to the cities and to keep social unrest in check. [Source]

CKGSB finance Professor Mei Jianping writes that a GDP target of 7.5 percent “may be possible” but a more sustainable model of economic growth will be required for the years ahead. From China Daily:

In contrast to the US, whose growth is sustained by more efficient use of resources, there is a limit to how much longer China can rely on labor and investment, he said.

[…] “For the last 30 years, China has been eating up a lot of capital, but it never seriously goes to the restroom. So one of the most amazing characteristic is the US system was the financial crisis. It’s bad, but it’s like somebody going to the restroom. You take a break and get rid of the excesses, then you become healthy. China hasn’t had a chance to do that,” he said. [Source]