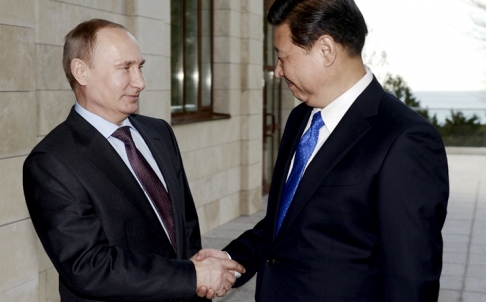 Reuters reports (via the SCMP) that Russia may have overestimated China’s support of its military intervention in the Crimean peninsula:

Russian Foreign Minister Sergei Lavrov and his Chinese counterpart Wang Yi in a phone call noted “broadly coinciding points of view of Russia and China over the situation”, the Russian foreign ministry said. Russia appeared keen to stress that it has a major international ally on its military intervention in Ukraine after the other members of the G8 on Sunday released a statement condemning Russia. China is not a member of the G8.

When asked about Ukraine at a regular press briefing yesterday, foreign ministry spokesman Qin Gang answered indirectly. “China has always upheld the principles of diplomacy and the fundamental norms of international relations,” he said.

[…] Niu Jun , a professor of international affairs at Peking University, said: “What this statement is really saying is, ‘what Russia did was not right and China does not want to support this military invasion’.”

But China also wants to support Russia, so it came up with excuses such as Russia’s history with Crimea and Ukraine’s internal situation, he said. [Source]

Despite China’s stance against foreign interventions, Bruce Einhorn at Bloomberg Businessweek predicts that China may give Russia a pass on this issue even though it has advocated for a political solution that respects international law:

[…] China’s official Xinhua news agency yesterday reported China’s position, as articulated by a Foreign Ministry spokesman: “China always sticks to the principle of non-interference in any country’s internal affairs and respects the independence, sovereignty, and territorial integrity of Ukraine.”

Then, late today (China time), came what might seem like a word-salad of a statement from official spokesman Qin Gang elaborating on the one from Sunday. “China upholds its own diplomatic principles and the basic codes for international relations, which have also been implied on the Ukraine issue,” Qin said when asked for comments on Russia’s actions. “Meanwhile, we have also taken the historical and contemporary factors of the Ukraine issue into consideration.”

China appears to be weighing three sets of interests in Ukraine. First, Beijing has no desire to unnecessarily complicate its relations with Moscow. Russia is a useful partner for China in areas ranging from energy and arms cooperation, joint positions on regional challenges such as Iran, Syria and North Korea, and broader opposition to perceived excesses of U.S. “hegemony” around the world. China also likely prefers not to lose the positive momentum gained from President Xi Jinping’s attendance at the Sochi Olympics last month.

[…] Second, China has an interest in the long-term stability of Ukraine. In particular, Beijing has incentives to prevent a chaotic situation that would undermine its economic and strategic relations with Kiev. China is Ukraine’s second-largest trading partner after Russia, with total trade in 2013 valued at $7.3 billion. China also has major stakes in Ukraine’s agricultural sector, with a September deal reportedly granting a PRC state-owned enterprise access to up to five percent of Ukraine’s arable land.

[…] Third, China has a broader interest in defending the norm of non-interference in states’ internal affairs. Although China has adopted a more flexible interpretation of this norm in recent years, Beijing is likely reluctant to condone external military intervention in Ukraine without UN Security Council approval. The reason is that Beijing fears that any erosion of the norm could have potential implications for outside meddling in China’s own claimed territories, including Tibet and Taiwan. [Source]

Chinese officials recognise that water scarcity and pollution, rapidly transforming diets and the migration of farmers to cities, may combine to jeopardise China’s grain self-sufficiency goals. Chinese agricultural investments abroad and trade partnerships like the one with Ukraine are expected to grow.

Places like Ukraine may have fertile land, but badly need the modernisation of its agricultural sector. They stand to win from commercial agriculture contracts with China, provided that agricultural intensification is done sustainably.

[…] The shape of Ukraine’s territorial integrity after the crisis will define much of the legal and political prospects of sustaining land deals made in 2013. But even if parts of the Ukraine were to be annexed by Russia, this would not change the reality that land and local populations need viable agricultural investments in order to thrive, and China has a role to play there too. [Source]