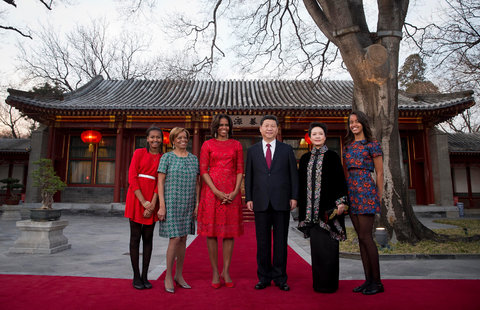 Carol Giacomo at The New York Times argues that First Lady Michelle Obama “seems to have hit most of the right notes during a week of travel, including emphasizing the importance of human rights and free speech”:

On Wednesday, Mrs. Obama drew attention to the highly sensitive issue of the semi-autonomous region of Tibet and minority rights in general by dining at a Tibetan restaurant in Chengdu. During the past five years, over 130 Tibetans have set themselves on fire to protest against Chinese rule.

Her messages were not delivered in the confrontational style of Hillary Clinton, who as first lady attended the United Nations Conference on Women in Beijing in 1995 and insisted that “women’s rights are human rights,” prompting China to denounce her and block her remarks on Chinese television and radio. Mrs. Clinton’s call was historic and important. We can’t yet know whether her message or Mrs. Obama’s will have greater impact.

[…] Apart from the normal tourist pursuits — walking the Great Wall, feeding pandas – Mrs. Obama spent most of her time appealing to China’s youth. She made the case that excellent education should be for all, not just the rich, and said it will “empower young people in China and the United States to come together and ensure that our shared future is peaceful and prosperous.” [Source]

U.S. President Barack Obama met the Dalai Lama in February, a meeting denounced by Beijing as interference in its internal affairs.

President Obama said he did not support Tibetan independence from China and the Dalai Lama has always denied seeking it, the White House said in a statement at the time.

Internet users saw the lunch as a thinly veiled message.

“This carries strong political overtones, meant to communicate that the U.S. is paying close attention to politics in Tibet,” one user wrote. “When it’s plain that the aim is to dictate to China, can you still say that the U.S. first lady’s trip is just innocent travel?” [Source]

The state-owned restaurant, opened last year, sits inside a hotel founded in 1956 by the Chinese government of Tibet. “I have a deep feeling towards Tibet, I am half-Tibetan,” Shi said. “I like Tibetan food, especially butter tea. I am glad Michelle also likes it.”

Tibetan exiles viewed Obama’s actions with a more political slant. The visit “is a strong signal to the Chinese government without saying anything explicitly,” said Tsering Tsomo, executive director of the Tibetan Center for Human Rights and Democracy, in Dharamsala, India, which is home to Tibet’s government-in-exile.

“We believe it’s a strong message that she is concerned about what is happening in Tibet. She has already spoken on this trip about rights including freedom of expression and worship. These are rights that are being restricted and violently suppressed by the Chinese government in Tibet,” said Tsering.

Through her interaction on the prayer wheels and scarf, Obama sent “implicit” messages on Tibetan religion and traditional culture to the authorities “without provoking them,” she said. [Source]

On her travel blog, which she kept to inform U.S. schoolchildren and others about her trip, Obama wrote about her visit to the Tibetan tea house:

The Tibetan people have struggled to preserve their unique religious and cultural traditions, and this visit was a powerful reminder of how important it is for each of us to treasure what makes us special, even when it makes us feel different from everyone else. I know that’s not always easy, especially when you’re a minority in your school or community. But in America, our diversity is what makes us who we are — it’s what makes our country so vibrant, strong and endlessly interesting. So don’t be afraid to celebrate where you come from and whatever it is that makes you who you are — and don’t hesitate to share that with others. [Source]