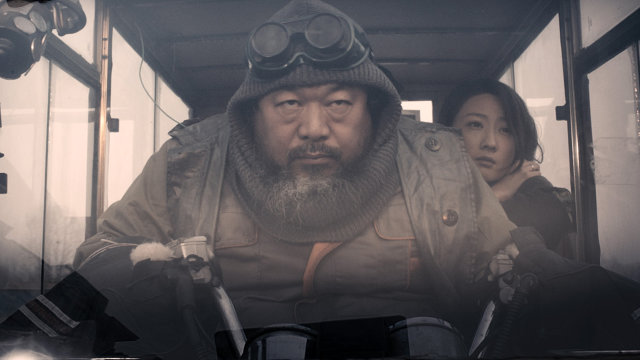 Following a foray into music last year, Ai Weiwei is set to make his acting debut in a ten-minute science fiction short by former TED Talks director Jason Wishnow, with cinematographer and Wong Kar-wai collaborator Christopher Doyle. Ai plays a water smuggler in a drought-stricken future extrapolated from China’s current water problems, but says “it’s not really [about] water. It’s about information.” The filmmakers are now seeking support on Kickstarter to recoup costs and fund the project’s completion.

Dan Solomon discussed the project with Wishnow at Fast Company:

[…] The team shot in cold and smoggy conditions in Beijing (the pollution index hit a record 800 during production). Because of Ai Weiwei’s status with the Chinese government (one early meeting saw him whisked away for interrogation by police), the film was shot largely in secret, with code-names and various forms of communication. (Though, as Wishnow points out on the project’s Kickstarter page, Ai Weiwei did Instagram a photo from set.) Because of the secretive nature of the project, the Kickstarter campaign was launched after the film was in the can, to recoup costs and help out with VFX, music, subtitles, and other finishing touches.

[…] “I framed the film as the prelude to a feature, so in many ways it builds a world and creates a context,” he explains. “It may or may not include the characters that you see in this short. I would honestly love to pursue all of these characters, and I’ve thought quite a bit about different permutations of where the story could go, based on the fact that there could be a version that would include Ai Weiwei’s character in a more substantial role–or potentially not at all. If I could, I would love to include this segment in a feature, as well.” [Source]