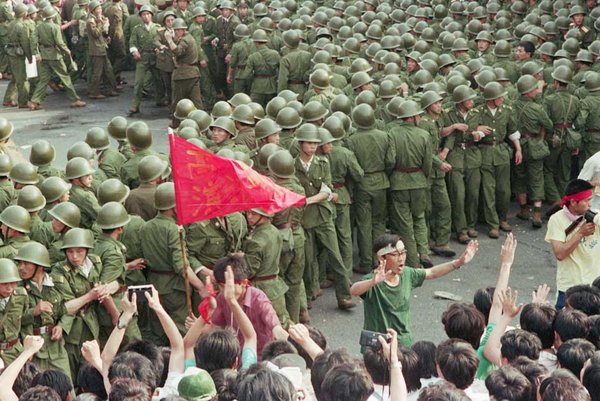 The New York Review of Books reprints a chapter by Perry Link in Rowena He’s Tiananmen Exiles: Voices of the Struggle for Democracy in China, in which he discusses the legacy of the June 4th, 1989 military crackdown on protesters in Beijing, 25 years later:

The Tiananmen massacre, as if having a will of its own, seems to come back to undermine whatever the regime claims as its legitimacy. In 1989 it killed the “socialist idealism” claim once and for all; then, when Deng shifted to nationalism, stressing that the Party and people are one, it was impossible not to recall when the Party and the people were on opposite ends of machine guns. So the regime still needs to list massacre-memory as one of the kinds of thought that most needs to be erased. It uses both push and pull to do this. “Push” includes warnings and threats, and—for the recalcitrant—computer and cell-phone confiscation, passport denial, employment loss, bank-account seizure, and the like, and—for the truly stubborn—house arrest or prison. “Pull” includes “invitations to tea” at which one hears smiling reminders that a better life is available to people who stop talking about massacres; advice that it is still not too late to make this kind of adjustment; comparisons with others who are materially better off for having made just that decision; offers of food, travel, employment, and other emoluments (larger if one cooperates by reporting on others); and counsel that it is best not to reveal the content of all this friendly tea-talk to anyone else.

The “pull” tactics have been especially effective in the culture of the money-making and materialism that has pervaded Chinese society in recent times. The emphasis on money, in combination with authoritarian limits on open discussion of other principles, has led to a poverty in the society’s public values. Vaclav Havel wrote about the “post-totalitarian” condition as one in which a pervasive web of official lies comes to constitute a sort of second version of daily life. Echoing Havel, the Tiananmen student leader Shen Tong observes that “the reality of living in a police state” is that “you live in a huge public lie.” The scholar and fellow Tiananmen leader Wang Dan, in explaining the behavior of people who, from no real fault of their own, become inured to lies over time, finds that they “lie subconsciously.” China’s celebration of money-making does make it different from Havel’s Czechoslovakia, but hardly better. Far from melting the artificiality (as the theories of optimistic Western politicians have held that it would), the money craze in some ways has worsened it. [Source]