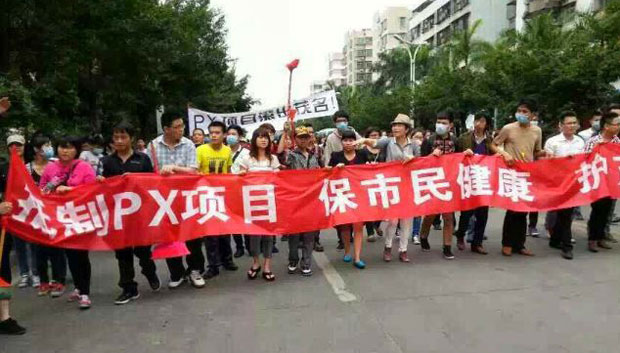 Reuters reports that hundreds of residents of Maoming, in Guangdong Province, marched against a proposed chemical plant on Sunday:

Photos posted on Weibo, China’s Twitter-like microblog service, showed hundreds of demonstrators marching along the streets, an overturned car in flames and protesters laying bloodied on the road. Others showed lines of paramilitary police marching in formation.

The images of violence – which could not be independently verified by Reuters – caused an outcry on Chinese social media, although many were later removed from the site by censors.

Residents of Maoming, in Guangdong province, were protesting the production of paraxylene, a chemical used to make fabrics and plastic bottles at a plant run by the local government and state-owned Sinopec Corp, China’s biggest refiner. [Source]

The plant will produce the chemical paraxylene, known as PX, which is used to make fabrics and plastic bottles. There have been a series of recent anti-PX demonstrations across China, including incidents in Kunming and Chengdu.

The local Maoming government, which set up the plant along with state-owned Sinopec, called the incident a “grave violation” by criminals. One protester told The New York Times that the demonstrations began peacefully before a clash broke out with police:

“In the morning everything was orderly, but in the afternoon some young troublemakers arrived on the scene and began throwing eggs, water bottles and rocks at police outside the party committee offices,” said the protester, who gave only his surname, Chen.

Police then moved to clear the area. A representative of the city government’s news department said more than 20 people were injured, including protesters and police. The government said no one was killed.

Photos posted online showed demonstrators holding signs that read “PX get out of Maoming!!!” a reference to the potentially hazardous chemical paraxylene, also known as PX, which is used in the production of plastics. The paraxylene plant is now in its planning stages and undergoing an environmental impact assessment, the government says. [Source]

The South China Morning Post reported that the Maoming Daily, a local government newspaper, ran a lengthy front-page article on Monday in which it praised the plant and called PX “an important element for a happy life.”

Reports of violence and even deaths have circulated on Twitter but have not been verified:

Residents have opposed the Maoming PX plant since 2009, when plans for the plant were announced.