The Perils of Going Online in Xinjiang 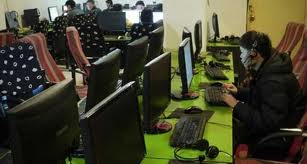 This is the Uighur web. The space can be defined as the Internet as it exists within the borders of China’s far western autonomous region of Xinjiang, the homeland of the Turkic-language-speaking, mostly Muslim Uighur minority. It can also be seen as the Uighur-focused Internet perused by Uighurs across China. In both cases, content and access are tightly controlled.

Because of sporadic violence that the Chinese government blames on a simmering separatist movement, authorities are vigilant about scouring the Uighur web for material that they think could incite unrest. After ethnic riots in the regional capital of Urumqi left at least 197 people dead in July 2009, Xinjiang’s web was unplugged for 10 months, stranding 22 million people of all ethnicities offline.

Xinjiang has “gained independence on the Internet, separated from the Internet world,” blogged journalist and blogger Wang Dahao wryly a few months into the shutdown. “It was absolutely unbearable,” Zheng Liang, a lecturer at Xinjiang University in Urumqi, who researches media and ethnic minorities, told Foreign Policy. “I had to fly to another province to get to my emails.”

[…] A few months after the Urumqi violence, Xinjiang approved a law that made it a crime to post comments about independence or separatism online (the regional law reinforced already existing national legislation that bars seditious talk in cyberspace). The law also required Internet service providers and network operators to monitor and report any lawbreakers. This has put “intense political pressure” on webmasters and dissuaded people from opening new sites, said Alim Seytoff, president of the Uyghur American Association, in an interview with FP. “It can be very risky to open a website,” Seytoff said. “If you have a chat room and in the middle of the night somebody posts something seditious, the next day the webmaster will have a big problem.” [Source]

Academic Ilham Tohti is currently in detention on charges of separatism, partly for his role editing Uyghur Online, a website about Xinjiang affairs.

Meanwhile, Xinhua has published a rose-colored portrait of life in Xinjiang under the 2009 Internet closure:

As a result, life for those living in Xinjiang changed abruptly after the July 5 riot.

In the eyes of a local college student surnamed Wang, almost all Internet bars in Urumqi at that time were transformed into game rooms overnight. “Otaku,” or young people who surf the web all day, left their homes to hang out with friends in restaurants, drinking beer and feasting on mutton kebabs.

Video shops that had been on the verge of extinction were revived, with customers flooding in to rent movies. Every film, blockbuster or not, became a sell-out in local cinemas.

Wang himself became a frequenter of KTVs, or karaoke bars. “My singing skills were honed during that time,” he said. [Source]

But Josh, an American who has lived in Xinjiang since 2006, offered an alternative account of life during those ten months on his blog Far West China:

Once September rolled around and it started to sink in that this might not be “temporary” after all, the newest topic of casual conversation among friends became “What work-around have you found or heard about?”

I heard of many people (especially Uyghur who had family abroad) would would call a friend in Beijing or Shanghai and have them literally hold the phone next to a second phone they had used to call internationally. The connection was poor, but it worked.

Satellite connections were another option that I heard mentioned more than once, but not only did it have the potential to get you in real trouble, it was also incredibly expensive. There was no way the average Xinjiang person could afford a 10,000+ RMB option. I know I couldn’t.

There was one work-around I came across that ended up working well – a dial-up internet connection via a long-distance call to Beijing. It was unbelievably slow and it wasn’t cheap – each minute was charged both long-distance fees and internet usage fees – but it worked. Every day I was able to connect for about 5-10 minutes at most to send emails and try to fix banking problems back at home. [Source]