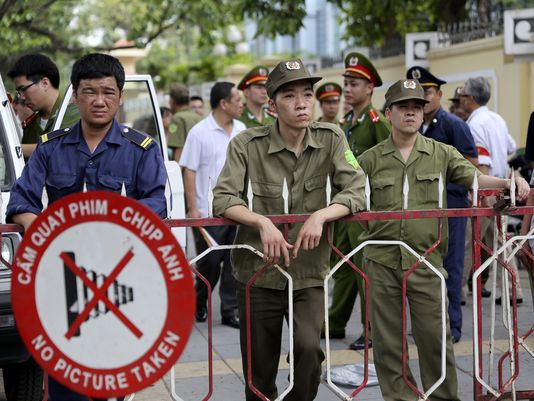 Jethro Mullen reports that China has evacuated more than 3,000 citizens from Vietnam after territorial disputes resulted in violent attacks against Chinese:

Five Chinese ships will travel to Vietnam to help with the evacuation, the official Chinese news agency Xinhua reported Sunday, citing the Ministry of Transport. One of the ships has already set off from the southern island province of Hainan, the ministry said.

Two Chinese citizens were killed and more than 100 others were injured in the violence that hit parts of Vietnam last week, according to the news agency. Some of the worst violence appeared to have taken place in the central coastal province of Ha Tinh.

Foreign factories, particularly those run by companies from China and Taiwan, were burned and looted by rioters outraged over Beijing’s decision to send an oil rig into waters of the South China Sea that both countries claim as sovereign territory.

Vietnamese authorities initially allowed protests, which are usually forbidden in the country, to take place over the Chinese move. But after the unrest spiraled lethally out of control, the government tried to rein in its angry citizens. [Source]

Calum MacLeod at USA Today adds that Vietnam’s police forces have cracked down on the protests to avoid worsening relations with China, a move which China has criticized as a failure.

The crackdown Sunday, enforced by thousands of police and security officers, suggests Hanoi wants to avoid further antagonizing its far larger neighbor, despite the official and widespread public anger in Vietnam over recent Chinese moves in the South China Sea, which U.S. officials have also described as “provocative.”

Two Chinese workers were killed midweek, and more than 100 injured as mobs targeted Chinese factories and Taiwanese factories employing Chinese workers. In a bid to reassure nervous foreign investors, top Vietnamese security official Lt. Gen. Hoang Kong Tu vowed Saturday to ensure the safety of all foreign citizens and investments in the country, including from China. Over 1,000 suspects have been arrested in connection with the attacks, which authorities have blamed on extremists. [Source]

Read censorship instructions from the Chinese government on reporting the attacks via CDT.  Also read more about territorial disputes via CDT.